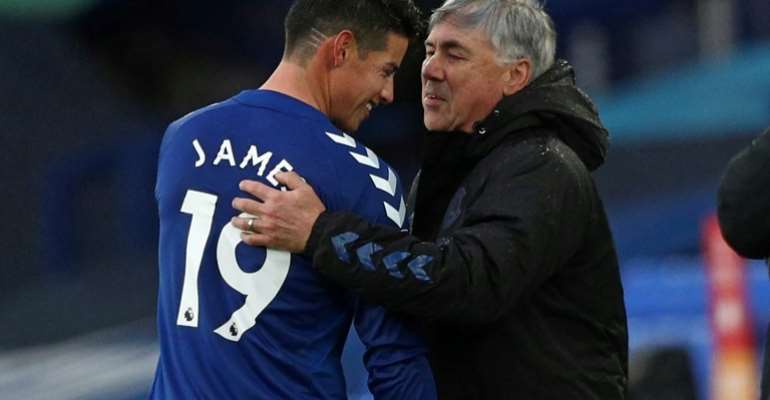 Lifted by Carlo Ancelotti's astute leadership and the transformative signing of James Rodriguez, Everton have a golden opportunity to prove their rise to the top of the Premier League is no fluke when they face Liverpool on Saturday.

Everton have gone 22 matches without a win over Liverpool since their last Merseyside derby success in October 2010.

But a decade on, Everton finally face their near-neighbours from a position of strength, while Liverpool arrive at Goodison Park looking unusually vulnerable.

Everton's perfect start to the season extended to a fourth successive league win when they brushed Brighton aside before the international break.

Just 24 hours later, Liverpool suffered a humiliating 7-2 loss at Aston Villa that highlighted the defensive flaws that have bedevilled the Premier League champions this season.

If Everton can take advantage of Liverpool's mini-crisis, it would provide further evidence that Ancelotti's side are capable of turning their early-season form into a sustained revival.

Without a major trophy since the 1995 FA Cup, Everton have languished in Liverpool's shadow since the 1980s, when Howard Kendall led them to a pair of top-flight titles.

Thanks to the intuitive guidance of Italian boss Ancelotti and the sublime displays of Colombia playmaker James, the Goodison Park club have hope again.

Ancelotti's relaxed public persona masks a fiercely competitive streak that has taken him across Europe in search of more managerial glory at an age when many of his peers are ready to step away from such a stressful job.

The 61-year-old has won domestic titles with Chelsea, AC Milan, Paris Saint-Germain and Bayern Munich, as well as lifting the Champions League with Milan, as player and manager, and Real Madrid.

His reputation lost a little lustre during a troubled spell with Napoli that ended with his dismissal in December after 16 months in charge.

Last season, after Ancelotti's first seven months at Goodison, Everton finished a disappointing 12th, prompting suggestions his appointment to replace the sacked Marco Silva had been a mistake.

But he has turned the tide, helped by a dressing room blast that defied his urbane image.

Tearing into his players after a spineless 3-0 loss at Wolves last season, Ancelotti demanded more ambition and the response has been emphatic.

"We are all aware our standards dropped last season," said Everton captain Seamus Coleman. "There are ways of losing games, but I thought the fight wasn't there in some games and wanted to make sure the lads understood what it means to play for this club.

"We have a top-class manager who won't accept anything else. Since we came back, the standard and work rate has been fantastic."

Ancelotti has brought the best out of striker Dominic Calvert-Lewin, who has netted nine goals in six games for Everton this season before scoring on his England debut last week.

His masterstroke has been the close-season capture of Real Madrid cast-off James.

The 2014 World Cup Golden Boot winner fell out of favour in Madrid, but Ancelotti still had faith in him after their time together at Real and Bayern Munich.

Having won La Liga and Champions League titles with Real and enjoyed domestic success in Munich, the 29-year-old has brought a quality and confidence that has helped address Everton's chronic lack of belief.

"James has improved us without a shadow of a doubt," said Coleman. "He has got unbelievable quality when we get him the ball. His range of passing and decision-making are fantastic. We are very fortunate to have him.

"Dominic is benefiting from James and the whole team is at the minute."

While it is too early to proclaim Ancelotti's squad as the equals of Everton's 1980s icons, a top-four push would look realistic if they can add to Liverpool's problems this weekend.