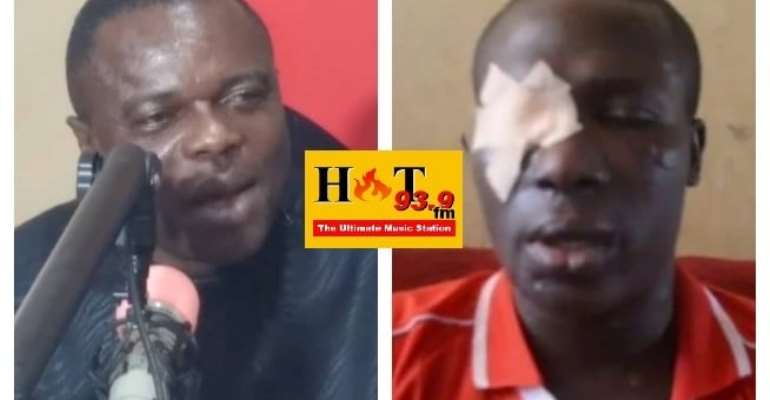 Kumasi Asante Kotoko FC's First Vice Chairman of the National Circles Council and former management member of the club, Nana Kwame Dankwah has gone haywire on the victim of the police shooting incident, Augustine Oppong in January at the Baba Yara sports stadium.

Augustine Oppong, who was victimised, and got blinded after being shot by a policeman during the chaos following Asante Kotoko’s defeat against Brekum Chelsea FC alleged that he has been neglected by the police ever since the incident, during an interview on Kumasi-based Hello 101.5 FM.

He added that even though he received some help from the NCC, he could use more help, as his wife is pregnant and he does not have the means to cater for her.

Speaking as a panellist on Hot 93.9 FM’s Focal Sports morning show hosted by Bigality, Nana Kwame Dankwah, however, expressed his disappointment in Augustine, calling him ungrateful.

He revealed that the National Circles Council has made a significant effort to support the victim, and has already promised to help him to re-establish himself when he is healed.

Mr Dankwah counter-alleged that the family of Augustine has not been supportive, since the incident. He indicated that the NCC has solely spent over Ghc 20 000 on the blinded man and have been looking forward to his recovery. He said this during the Focal Sports morning show on Monday, October 14, 2020:

“...Does Augustine not have a family? You got involved in an accident, and we have assured you of another car when you recover because you were formerly driving someone’s car. What else does he require of us, while he is still yet to recover? We are still in the business of supporting him. With all due respect, how much has the family spent on him since he got hurt?…”Kwame Dankwah fumed