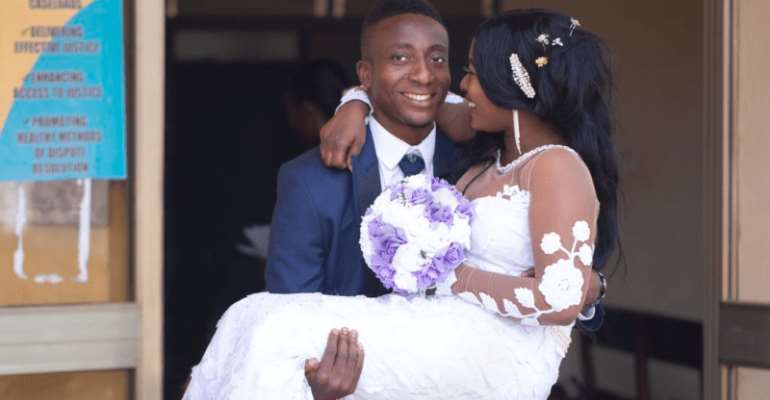 Felix Annan with his wife

Annan was relegated to the bench during the cancelled 2019/2020 Ghana Premier League campaign, with head Coach Maxwell Konadu giving Kwame Baah the nod.

Annan had left the team’s camp for his wedding only to return to see Baah taking his first spot at the club.

The development has affected the 25-year-old’s chances with the senior national team, the Black Stars, with Annan missing out on CK Akonnor’s first squad announcement back in March.

To make matters worse, the Porcupine Warriors have announced the capture of Black Stars goalkeeper Razak Abalora, a move many believe would deepen Annan’s chances of reclaiming his number one position during the 2020/21 season.

Speaking in an interview with Kumasi-based Akoma FM, Carr said “If you decide to go and marry at the time when your club has a crucial match and another goalkeeper takes advantage of the situation, you must live by your decision.

‘’He must train hard and recapture his position instead of complaining.

‘’I will not choose marriage over my career because a woman can leave you when things are very bad so for me it is career first, other things second. He could have postponed the wedding and focused on the match first.

"After all it’s the engagement or the traditional marriage that matters not the wedding.”