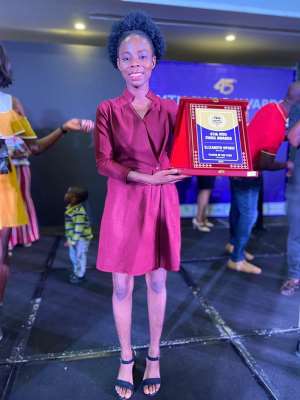 Ms Elizabeth Opoku last weekend was honoured by the Sports Writers’ Association of Ghana (SWAG) as the female hockey player for the year 2019 during the 45th MTN SWAG Awards nights.

This is the third time she is picking such prestigious award making her the only female hockey player to receive the highest number of recognition from SWAG.

She received her first award in the year 2014 and was awarded again in 2015 during the 40th edition of the awards and five later bounced back to be honoured again.

Speaking in an interview with the media, the National team forward thanked SWAG for the recognition and assured her fans and the hockey fraternity that she will continue to do her best for the sport.

She also acknowledged the support of her mother who was with her at the event venue and added that one of her dreams which was having her mm by her side when she is being honoured has come true and thank God for making it possible for her mum to see how far she has gone in her sporting career.

Lizzy as she is called by her teammates has lots of awards with Ghana and on the continent since she began her sporting career over a decade ago.

In 2009, she was awarded as the best player in the schools and colleges sports federation and won the promising star player in the 2010 Chairman’s invitational cup. In 2012, the University of Ghana awarded her as the Discovery of the year during the VC Awards and also emerged best player and top scorer in the 2013 Africa Hockey Cup of Nations in Kenya.

Accra-based Happy FM also awarded her in 2013 with the Fans’ Choice Awarded as the best player in hockey and won the International Hockey Federation (FIH) best junior player in the Hockey World League R1 the following year. In 2019, she was voted as Ghana’s Outstanding Woman in Sports,

Latest Photo Reports
Catch up with all the political quotes from our politicians.
Advertise here
More from Hockey
ModernGhana Links
Ghana loses 3-2 to Kenya in Hockey at 2022 CWG
Ghana suffers second half collapse to lose 1-6 to Wales in Men’s Hockey
Ghana misses out on big win against Canada in Commonwealth Games Men’s Hockey
TOP STORIES

Lack of toilet facility in a school causes pregnancy of 15-y...
59 minutes ago