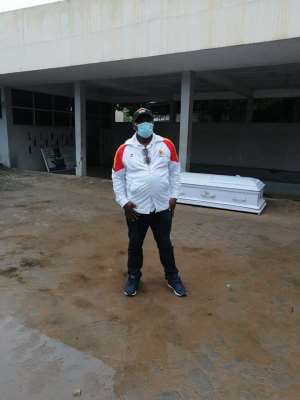 Head trainer of the Black Bombers, the national boxing team Dr Kwesi Ofori Asare has disclosed that the demise of John Commey in a big blow to his team building for a formidable squad that will qualify for international tournaments.

Speaking to Sammy Hywoo Okine during the funeral of the 18-year-old pugilist he said Commey is very disciplined, courageous, stylish, durable, strong and willing to learn.

According to the head coach, he could not go to the Olympic Qualification in Dakar due to lack of funds and he was being prepared for future Games.

Coach Eben Adjei aka Killer of the Black Panthers Gym also described Commey as very obedient and disciplined who most of the young boxers are looking up to and take inspiration from.

"We are really bereaved, we have lost a boxing gem, and you can see how the fans loved him. He was a real classic boxer " he explained.

Charles Quartey of the Charles Quartey Boxing Foundation said he was one of the boxers being looked up to for the future of amateur boxing in Ghana. He hoped that his replacement would be found.

Carl Lokko of the Bronx Gym said he was sad and prayed that the good Lord Almighty will keep him safe. He advised young boxers to live good lives and show respect.

Hundreds of people from all walks of life joined mourners at Sakumo Tsoshi for the funeral.