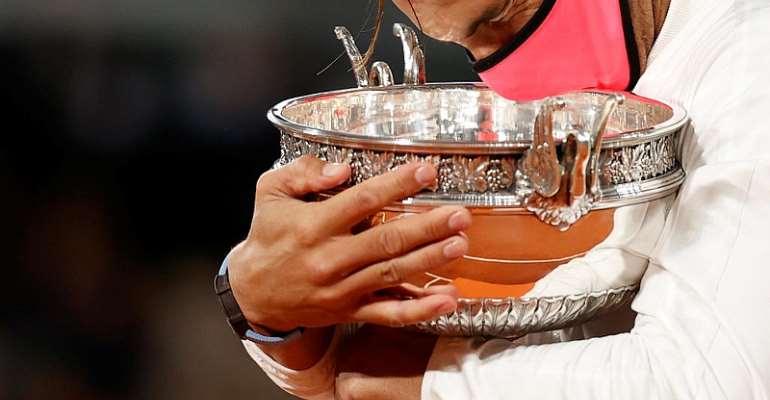 Defending champion Rafael Nadal continued his French Open love affair on Sunday with a straight sets victory over the top seed Novak Djokovic to claim the title for a record-extending 13th time.

The 34-year-old Spaniard triumphed 6-0, 6-2, 7-5 in two hours and 41 minutes of enthralling tennis on Court Philippe Chatrier.

“The only thing I want to think about is winning Roland Garros again,” said Nadal.

“I'm not thinking about equalling records. Roland Garros means everything to me. I've spent most of the best moments of my career on these courts here.

"Just to play here is an inspiration and to continue the love story I have with this place is wonderful.”

Overpowered
It was a crush in a first set that appeared contrary to the laws of modern tennis. Djokovic was a flurry of mistakes and poor judgments to go a double break down.

Nadal tightened his grip to lead 4-0 and the Spaniard applied the pressure to win the set in 48 minutes.

Djokovic clenched his fist when he notched up his first game of the match after 54 minutes of play. That was the opening game of the second set.

But that set too was ripped away from the 33-year-old Serb almost as clinically as the first.

Djokovic only appeared to ignite when Nadal broke to lead 3-2 in the third set.

Comeback
His trademark forehands started to flow and he won two consecutive games to take a 4-3 lead.

The anticipated final had arrived. An aggressive Djokovic matched Nadal from the back of the court. Strokes of intensity, daring and skill flashed from either side.

After fending off a break point to lead 5-4, Djokovic cracked soon after. A fourth double fault coughed up the break to give Nadal a 6-5 advantage and the chance to serve for the match.

He seized the crown with his fourth ace of the tie and dropped to his knees.

“What you are doing on this court in Paris and on all the other courts around the world is amazing. You are a great champion. I didn't play well today … I was outplayed by a better player.”