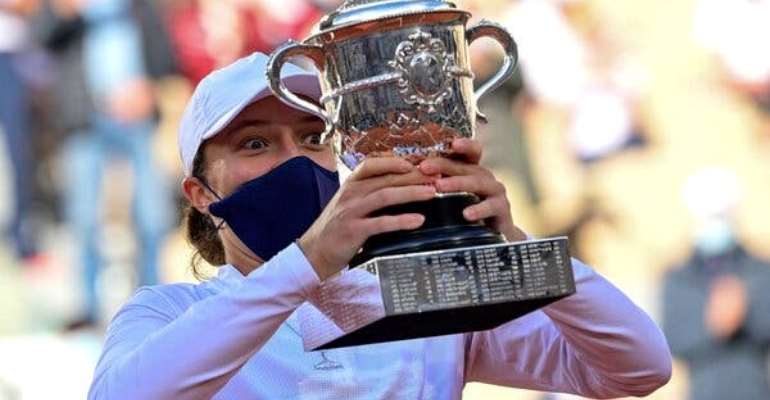 Just a week ago Iga Swiatek was unsure whether she would commit to tennis long-term or go to university.

Now the 19-year-old is a Grand Slam champion - the lowest-ranked woman to ever win the French Open.

"I wasn't expecting to win this trophy," the Pole said after her dominant 6-4 6-1 win over American fourth seed Sofia Kenin in Saturday's final.

"It's obviously amazing for me. It's a life-changing experience.

"I just feel like I kind of made history."
Swiatek, who did not drop a set in the tournament, is the first player from Poland to win a Grand Slam singles title and the youngest French Open women's champion since Monica Seles in 1992.

She is highly regarded, having won the Wimbledon junior title in 2018, but had never won a tour-level tournament before victory in Paris.

Her youthful innocence was shown in her charmingly awkward on-court interview after the match.

Where the more seasoned and media-trained champions might quickly reel off a list of many sponsors by name, tournament organisers and team members, Swiatek meandered and said she hoped her cat had been watching at home.

"First of all, I'm not very good at speeches because I won my last tournament two years ago and I don't know who to thank," she said, before adding "should I say something else?" soon after.

One person she did thank was her father, Tomasz, a former rower who competed at the 1988 Olympics.

It was he who encouraged Swiatek and her older sister Agata to pursue tennis, having initially failed to get them to take up swimming.

Swiatek, who listens to rock music such as Guns N' Roses before matches, has not taken the conventional route to the top of the game.

Last year when she competed at Roland Garros for the first time and while doing so was juggling schoolwork for her studies back in Poland - studies she only finished earlier this year.

"I was calling her semi-pro in the past, because she was at school. She was studying like a regular person," her coach Piotr Sierzputowski said.

"The tennis wasn't the biggest part of her life.

"I had to schedule practice in the morning at seven because she had to go to the school."

And nor, it seems, is she a conventional teen - she admits switching off her phone for the past few days.

A deep thinker, Swiatek has employs a psychologist as a permanent part of her team - also a rare thing on tour.

Maths is the teenager's favourite subject and she has said it helps her game, allowing her to "see the geometry of the court".

Before her fourth-round match this year, a 6-1 6-2 dismantling of tournament favourite and former champion Simona Halep, Swiatek described the current phase of her life as "two gap years", not ruling out the possibility of leaving the sport to further her education.

"But if I am still top-100 for a few more years, then probably, I am going to go to university."

This win might have gone some way to settling the university question but she may instead want to work on fine-tuning her acceptance speeches as she may now have many more to give.