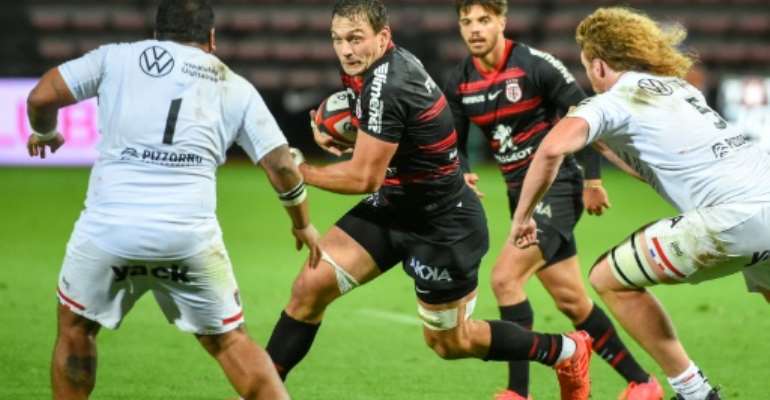 Rynhardt Elstadt returned from a two-week absence due to a calf injury in Sunday's win against Toulon. By Fred SCHEIBER (AFP/File)

South Africa back-rower Rynhardt Elstadt said his Toulouse team-mates are unconcerned about Racing 92 recording nine cases of coronavirus ahead of the Top 14 meeting in the French capital on Saturday.

The Parisians were forced to postpone last weekend's fixture at Castres after the positive Covid-19 tests with media reports claiming they were prepared to self-isolate the squad ahead of the fixture and European Champions Cup final on October 17.

"You can see they're making a big effort to control it but it's always difficult to control the uncontrollable," the 30-year-old added.

Loose forward Elstadt made his Springboks debut in July 2019. He was omitted from the Rugby World Cup winning squad months later but second-rows Lood de Jager and RG Snyman will miss the upcoming Rugby Championship opening up space in the set-up.

"I had a nice taste of it. I would really like to be a part of it again, it was a great experience. It's a lot of players on a different, much higher level. Everything goes much quicker, faster, smoother," he said.

"I'm not the first-choice lock, I don't mind helping out there, it's quite intense. I know there are a few locks at home who can stand up to the challenge, if not they'll have to grow up quite quickly and fulfil the spots," he added.

The tournament will be held in Australia between November 7-December 12 with Australia, New Zealand, Argentina and the Boks facing each other.

Elstadt said the All Blacks and the Wallabies will have an advantage as their players featured in Super Rugby Aotearoa and the Australian equivalent with the Boks just starting their own Super Rugby Unlocked this weekend.

"It won't be a fair battle because one side hasn't been playing for six months and the other side has been playing. It will be very interesting what will happen. You just have to make the best of the situation, it's only 80 minutes, you play it," he said.

"It's already on their side of the world. But it will be great, it will be good for rugby to try and start and get playing again," he added.

This weekend, Elstadt's club travel to Paris to face a side unbeaten so far this campaign with Scotland's Finn Russell pulling the strings from fly-half.

"He's a brilliant player, magic with the ball in hand and he's been in great form," Elstadt said.

"He's a quality player, he's in form at the right time," he added.

Elsewhere this weekend league leaders Clermont head to Bordeaux-Begles, who were top of the table when last season was halted due to the Covid-19 outbreak while Agen's trip to Castres has been postponed after reported positive tests for the virus.