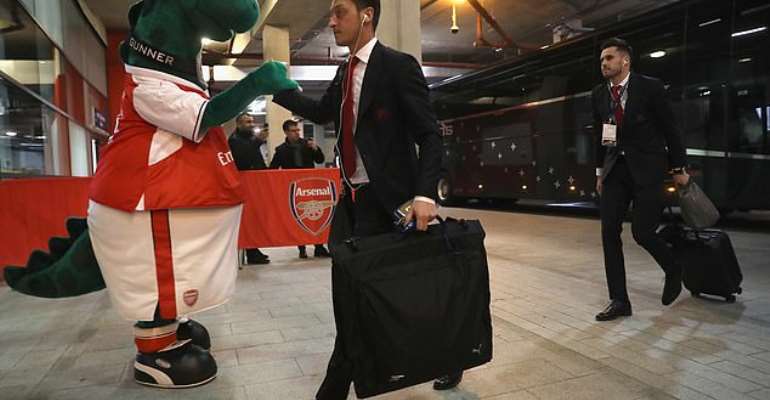 Gunnersaurus has been offered a lifeline by an unlikely source at Arsenal.

The Gunners controversially decided to make the legendary mascot redundant as a cost-cutting measure.

The big green dinosaur had been a permanent fixture at home games since 1993 but has been let go as the role is deemed no longer necessary.

Jerry Quy, who played the role of Gunnersauraus, is hugely popular at Arsenal having also been involved in the Junior Gunners and Travel Club.

Fans even set up a GoFundMe page to save him from extinction.

Players past and present have also expressed their shock at the decision to let him go, including Paul Merson and Ian Wright.

Mesut Ozil has decided to do something about it, though, and sensationally offered to pay his wages for the rest of his time at Arsenal.

Ozil wrote on social media: “I was so sad that Jerry Quy aka our famous & loyal mascot @Gunnersaurus and integral part of our club was being made redundant after 27 years.

“As such, I’m offering to reimburse @Arsenal with the full salary of our big green guy as long as I will be an Arsenal player so Jerry can continue his job that he loves so much.”

AFTV’s Robbie Lyle praised the gesture by Ozil and also criticised the club for axing the mascot in the first place.

“The bigger issue is that he’s lost his job. Mesut Ozil’s done that and it’s good PR for him obviously.

“That’s a nice gesture. I know that guy and he’s Arsenal through and through. Been at the club for years. Been a great servant to the club.

“I’m really sad they are letting people like that go. I understand maybe we are going to lay you off for a bit until things pick up. I just don’t understand getting rid of someone like that who has been so loyal to the club. It’s a bit of a shame.”

In response to the redundancy, an Arsenal spokesman told ESPN’s James Olley: “Gunnersaurus is not extinct and will return to action when fans are allowed back at matches.”