The social media campaign features 12 inspirational women and girls with ‘unstoppable’ qualities and will run over a period of three months, showcasing the diversity of the continent with ambassadors from Botswana, Côte d'Ivoire, Egypt, Ghana, Kenya, Madagascar, Namibia, Senegal, South Africa, Tunisia, Uganda and Zimbabwe. All trailblazers in their very own way with compelling stories.

Rugby Africa had called on all women in rugby across its member unions to share their inspiring stories to become one of the “Unstoppables” in the campaign. Over 60 women from 19 countries impressed the judges with their compelling stories of excellence, opportunity, and inspiration and just what it takes to become ‘Unstoppable.’ 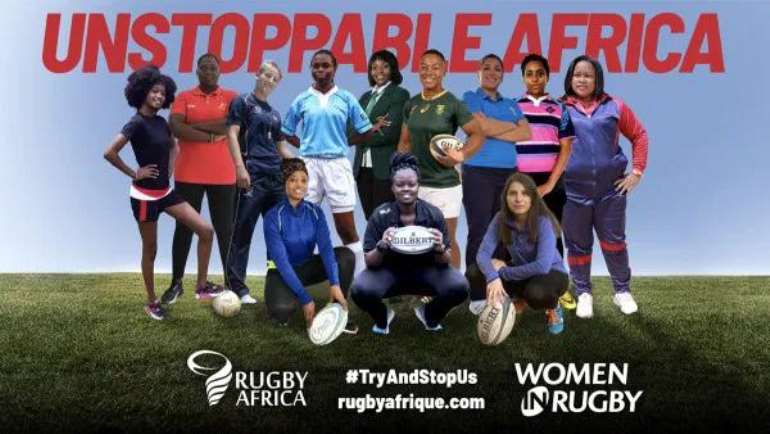 Rugby Africa is raising the profile and promoting women in rugby for a sustained change in the perception and diversity of the sport. Current data estimates that 26 per cent of the rugby players in Africa are female. An area that needs a special focus is the representation of female coaches and match officials as this is very low.

Khaled Babbou, President of Rugby Africa explains on behalf of the Executive Committee, “We want to do something very impactful and sustainable for all women in rugby on the continent to get players, fans and sponsors interested in the game. Our goal is to uplift the “Unstoppables” and the women in rugby beyond this campaign. We have a long-term vision and commitment. Africa is a big rugby market as the latest Nielsen report shows, conducted by World Rugby and one of the fastest growing markets in the world. It is such an untapped market in terms of athletic potential, growth opportunities and market penetration – especially for the women. As the individual stories of the campaign show, there are really strong women coming out of Africa.”

Paula Lanco, Rugby Africa Executive Member and Chairperson of the Women's Rugby Advisory Committee is excited to launch the Try And Stop Uscampaign: “It has been great to see the success of the World Rugby campaign started globally in 2017, and to now feature the phase 2 our African “Unstoppables.” From 2012 until 2018 there has been an immense growth in Women's Rugby in Africa – from 50’000 to over 260’000 registered players and we have an ambitious strategy to grow women’s rugby by an additional 30 percent by 2025.

It is especially critical in these challenging times to keep the players engaged. It’s now time to tell our own stories, in our own way, tapping into the diversity of our continent. A big thank you to all the inspiring African women in rugby who entered the #TryAndStopUs campaign. You are truly unstoppable!”

Katie Sadleir, World Rugby Women's Rugby Manager is looking forward to see the campaign flourish: “World Rugby is committed to help grow the game further in Africa in the coming years, capitalising on women and the strong footprint rugby has on the continent.

Accelerating the development of growth of women’s game is a key strategic area where we want to grow the participation, have representative leadership, lifting the profile and creating new investment partnerships and performance. Rugby Africa is hitting the mark in terms of its commitment to drive an acceleration and change in terms of women.”

More about the #TryAndStopUs campaign:

The social media campaign features a variety of images and videos. It is a mix of in-depth conversations and very short entertaining pieces like the teaser video where all “Unstoppables” are presented and give a glimpse of their diversity by a short ‘hello’ in their local languages. In a high-level talk show Maha Zaoui, Rugby Africa Women’s Rugby Manager moderates a session with Katie Sadleir, World Rugby Women's Rugby Manager, Paula Lanco, Rugby Africa Executive Member and Chairperson the Women's Rugby Advisory Committee, and Anna Preira, Member of the Senegalese Rugby Union and First African “Unstoppable” in the World Rugby campaign 2017. Each Unstoppable will be featured with individual statement images and videos. All content will be distributed across the Rugby Africa social media channels.

The “Unstoppables” of Rugby Africa:

For more information on the campaign and Unstoppables visit: https://bit.ly/34FcBQL