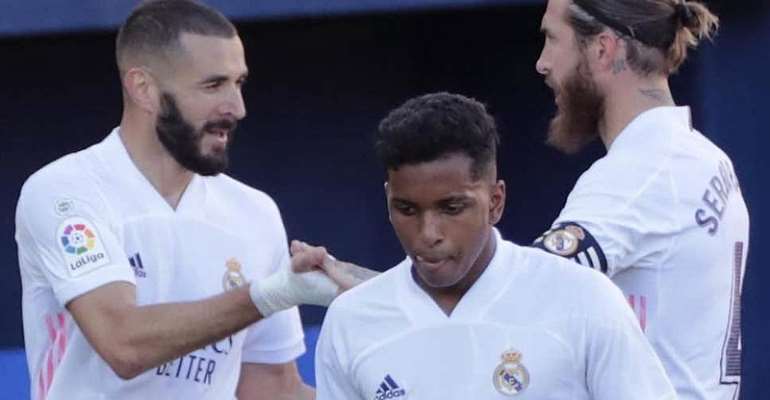 Goals from Vinicius Jr. and Karim Benzema plus some top class saves from Thibaut Courtois gave Real Madrid a 2-0 win at Levante on Sunday for a third consecutive La Liga victory.

Brazilian forward Vinicius, Madrid's match-winner in Wednesday's 1-0 win over Real Valladolid, also gave his side the lead at Levante, controlling a loose ball inside the area and taking his time to curl into the far corner in the 16th minute.

Real missed chances to extend their lead but in the end had to rely on another exceptional performance from goalkeeper Courtois to see out the victory, before Benzema added their second goal deep in added time on the break.

The win took the champions top of the standings with 10 points after four games, despite starting the season later than many of their rivals.

"We started both halves well, we should have scored the second goal earlier and it would have been a very different game but we got it in the end and sometimes you just have to suffer during a game," said Real coach Zinedine Zidane.

"This is what football is like, we were up against an opponent who played very well and had their moments in the second half but that's normal."

"It's normal for us all to be struggling a bit in the second half so early in the season, it was very hot out there and Levante are a very good team who know how to play well," added Vinicius.

"We are still lacking a bit of sharpness but after the international break I think we're going to come back much stronger."

Levante struggled to cope with Madrid for much of the first half at Villarreal's La Ceramica stadium, their temporary home while renovation work on their ground is being finalised, but they nearly responded to Vinicius' opener when Nikola Vukcevic headed against the bar after half an hour.

Madrid should have put the game out of Levante's reach in a blistering start to the second period in which Benzema fired against the post and Vinicius danced past two defenders only to miss the target from close range.

Captain Sergio Ramos looked to have found the all-important second goal when he headed home from a free kick but the effort was ruled out for offside following a VAR review and Madrid ended up riding their luck to cling to their advantage.

Courtois made himself big and thwarted a shot from Carlos Clerc with his legs, after making three saves to deny Enis Bardhi.

"Thibaut is a big part of this team and he saved us again but like all goalkeepers, he only wants to help the team," added Zidane.

"I'm happy with the chances we created but we need to try and make sure our goalkeeper suffers a bit less."

Time was almost up when Benzema skipped through on goal unchallenged and smashed high into the net to make sure of the victory.