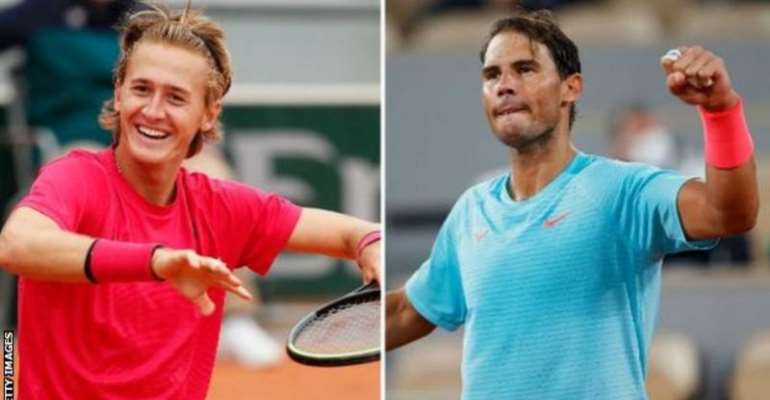 It's not his 19 Grand Slams, 12 French Open titles or almost two decades as a professional that make Rafael Nadal feel like he has been in tennis for a long time, but the name of his next opponent's cat.

On Friday, Sebastian Korda became the first qualifier to reach the last 16 at Roland Garros in nine years, a spell in which Nadal has won the championship seven times, and the pair will meet on Sunday.

The American is ranked 213th in the world, but the name might sound familiar. His dad, Petr Korda, was the 1998 Australian Open champion and reached the final in Paris in 1992.

On Sunday, in the second match on Court Philippe Chatrier (about 12:00 BST), Nadal will be coming up against the latest product of a family blessed with serious sporting pedigree.

Alongside Sebastian and Petr, mum Regina was a top-30 tennis player while golfing sisters Nelly and Jessica are ranked second and 22nd in the world, respectively.

And then there's the family pet, Rafa.
"That says a lot about how much I love the guy," laughed Korda, after seeing off Spain's Pedro Martinez in straight sets on Friday.

"He's my biggest idol. He's one of the reasons I play tennis. Just watching him play, unbelievable competitor. Just from him I have the never-give-up mentality. Whenever I'm on court, I try to be like him."

Korda had not even won a tour-level match in three previous attempts before last week.

But after three victories in seven days, as well as three in qualifying, the 20-year-old said he was "praying" for a fourth-round meeting with Nadal.

"That means that I have been on the TV for such a long time, that's the main thing," Nadal said in response.

"When I was a kid, I was watching Sampras, Agassi, Carlos Moya etc. Another negative thing that means is that I am 34. That's another point that is not beautiful.

"But I am happy to hear that. I know he's playing great. He's a very young kid with a lot of power. I think he has an amazing future, hopefully not yet."

Korda is the youngest American man to reach this stage at Roland Garros since 19-year-old Michael Chang in 1991.

The US prospect is determined to enjoy life on his debut in Paris. After beating 21st seed John Isner in the second round, he pretended to swim towards his team.

He later explained on Twitter it was because of a bet he had with one of his coaches, that they would have to swim the Charles Bridge in Prague if he won.

"Once you get to know Seb, he is such a goofball," his sister Nelly told the ATP Tour website. "Every single thing that he does is just so silly. He just makes it so much fun."

Korda, who is also a good golfer and has a handicap of "two or three", says the target is to outdo dad Petr on the tennis court.

"My dad, he's incredibly supportive. But my goal in life is to win two Grand Slams so I have one more than he has. That's what I'm going for," said the 2018 Australian Open junior champion.

"Both my parents are incredible. With the way that everything is going right now, they're super proud. I can't be more grateful for them."

Korda will need all that support and more if he is to upset 34-year-old second seed Nadal, who is chasing a 13th French Open crown and fourth in a row.

The final scheduled match on the main court is US Open champion Dominic Thiem up against 20-year-old French wildcard Hugo Gaston.