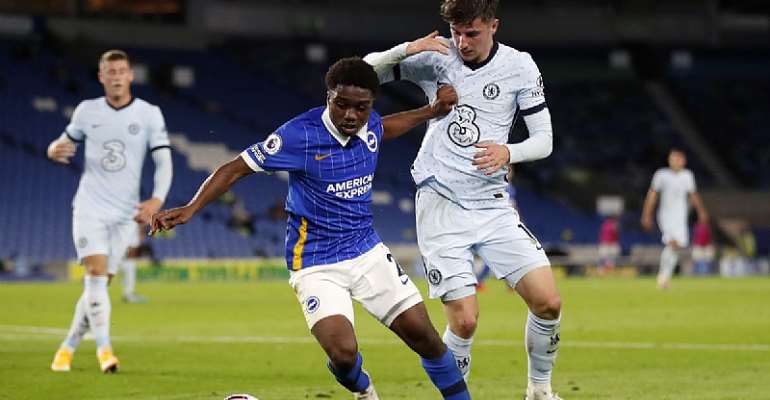 Tariq Lamptey [on the ball] in action for Brighton against Chelsea

Following an explosive start to the 2020/2021 English Premier League season, Brighton & Hove Albion star Tariq Lamptey has been nominated for the ‘Player of the Month’ award.

The English-born defender who is of Ghanaian descent joined the Seagulls from Chelsea earlier this year in January and has since not looked back.

This season, Tariq Lamptey has featured in all 3 matches of Brighton & Hove Albion, proving the confidence his manager Graham Potter has in him.

The 20-year old enjoyed an outstanding game against former club Chelsea FC on the opening weekend of the English Premier League before following it up with a 5-star performance against Newcastle United on Matchday 2.

With a decent outing against Manchester United which ended in dramatic fashion, the 20-year old has earned a nomination for the Premier League ‘Player of the Month’ award.

The full-back is up for the top award with the likes of Everton pair James Rodriguez and Calvert-Lewin, Jamie Vardy of Leicester City, Harry Kane of Tottenham Hotspurs, and a few others.

Mahama becoming President again is one of the greatest calam...
52 minutes ago