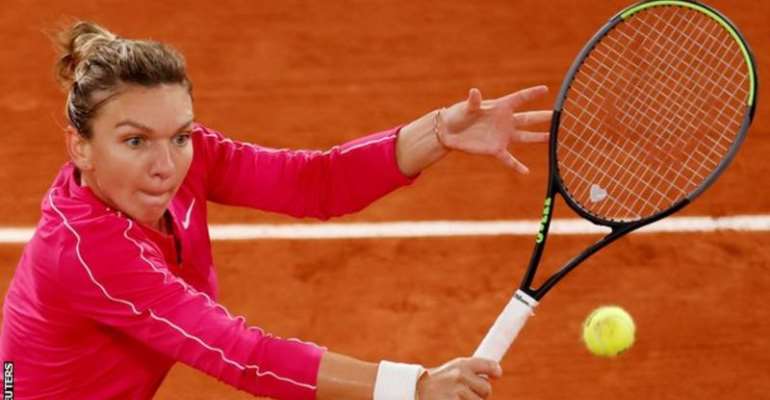 Halep won her first Grand Slam title at Roland Garros in 2018 and the next step towards another is a fourth-round match against Polish teenager Iga Swiatek.

The 26-year-old Ukrainian won 6-4 7-5 in one hour and 40 minutes against Russia's Ekaterina Alexandrova.

Few players - if anyone - have been considered as much of a favourite for the women's singles at a Grand Slam in recent years as Halep is generally perceived to be at Roland Garros.

The draws have been wide open over the past few years, leading to the crowning of 11 different champions in the past 15 majors.

Halep, however, came into the event as the player to beat after winning back-to-back titles on the clay in Prague and Rome.

A natural clay-courter, Halep's chances have also been boosted by the absence of defending champion Ashleigh Barty, who does not want to leave Australia during the coronavirus pandemic, and US Open champion Naomi Osaka.

Here, she demonstrated her credentials with a ruthless win over 19-year-old Anisimova, which avenged the American's surprise victory in their quarter-final meeting at Roland Garros last year.

The rematch was billed as one of the highlights of day six - but it did not live up to the hype.

Once 25th seed Anisimova was unable to take any of five break points in Halep's first service game of the match, she became frustrated and cut a sorry figure as the Romanian took control.

Things did not improve for Anisimova in the second set, despite odd glimpses of her ball-striking ability.

She was unable to settle and looked edgy throughout, hitting another 18 unforced errors in the second set as a focused Halep took full advantage to claim her 17th straight win.

"I played a really good match, I was really aggressive," said Halep, who made just seven unforced errors.

"I knew I had to change something from last year, I wanted to be better than that and I was."

Svitolina is aiming to win the first Grand Slam title of her career on a surface which she considers her most natural.

After disappointing third-round exits in 2018 and 2019, she has reached the second week at Roland Garros this time around.

Alexandrova double-faulted to hand her opponent two match points and then went long to see Svitolina safely through.

"It's always nice to be in the second week of a Grand Slam and have a chance to go deep into the tournament, that's always the goal," said Svitolina.

"It was not easy, going into the match I knew she would strike the ball hard and flat, so I had to adjust quickly with my feet. It was important to stay focused."

She will now face France's Caroline Garcia, who came from a set down to defeat Belgian 16th seed Elise Mertens 1-6 6-4 7-5.

Garcia, a quarter-finalist in 2017, had two match points in the 10th game of the third set but could not convert either and was broken. She eventually got over the line in the 12th, much to the delight of the partisan crowd inside Philippe Chatrier.

Swiatek, 19, booked her spot against Halep with a 6-3 6-2 win against 2014 Wimbledon finalist Eugenie Bouchard.

Argentina's Nadia Podoroska continued her fine form this year with a 6-3 6-2 victory over Slovakia's Anna Karolina Schmiedlova, who could not back up her win in the previous round over US Open finalist Victoria Azarenka.

Podoroska, 23, who is playing in just her second Grand Slam main draw, has won 11 successive matches and takes her record since the restart to 20 wins and three losses.