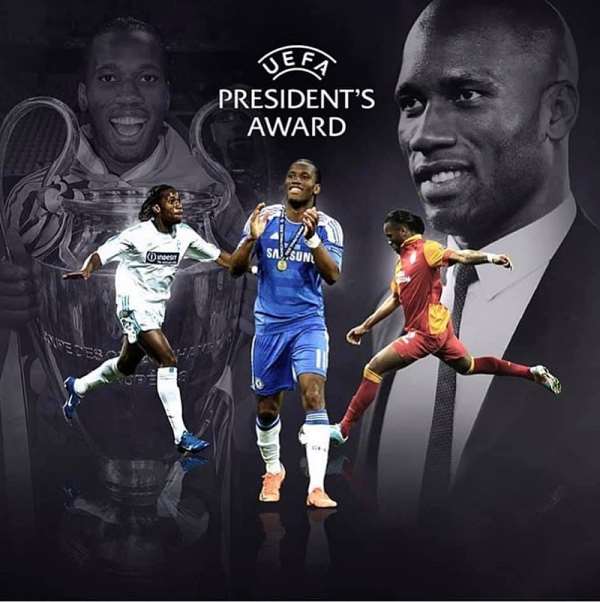 The honour was presented to legendary striker Drogba by UEFA president Aleksander Ceferin in Geneva ahead of the Champions League group stage draw, which the two former Blues assisted with by pulling the balls out of the bowls, pairing Chelsea with Sevilla, Rennes and Kransodar in Group E.

Inevitably, with the Champions League on the agenda, memories turned to our first triumph in that competition in 2012, with both players asked where that incredible penalty shoot-out victory over Bayern Munich ranked in their long list of career achievements.

‘I think it’s one of the best moments in my career, if not the best,’ said Drogba, who scored our late equaliser and the winner in the shoot-out in that final. ‘I had a manager when I was in Le Mans who told me “you don’t need to play 90 minutes, 10 minutes is enough for you to make the difference”. At first, I was frustrated but I learned how to use those 10 minutes and be efficient. So all those goals in the last minutes, I think is also because of this lesson.’

Malouda, who was one of the players making his last Chelsea appearance that night in Munich, added: ‘It was I think the greatest achievement of our life. We’d been chasing that trophy for so long. We’d been close in Moscow, it was four years earlier with a lot of drama as well, penalty kicks.

‘That time for this squad, it was a very emotional night, because we knew after that everyone would go their separate ways, but we knew we did something great and we celebrated as much as we could. We enjoyed it!’

It was also a landmark moment in Geneva as Drogba became the first African to receive the UEFA President’s Award, which recognises inspirational figures who have had a huge impact on the sport on and off the pitch, and the significance was not lost on the Ivorian.

‘I’m really proud and I think this should be an example of what African people or people coming from different regions and going to play in different countries could achieve with dedication and hard work.’

‘So today it’s me but I hope and I’m sure it’s going to be somebody else next. But the most important thing is football unites, football brings people together and that’s why for me to leave Africa and go to play in Europe and achieve something and be here today receiving this award is something that makes me really proud,’ said Drogba, who was also praised by Ceferin for his charity work away at home in the Ivory Coast and around the world.

‘Football is a reflection of society so we footballers have a responsibility towards the community because it’s the community that comes to the games. It’s the community that entertains. They mean a lot and we’ve seen during these last few games they were not in the stadiums, we saw how much we missed them. That is why our goal is not only to play well, it’s also to represent the community and to give something back as much as we can.’