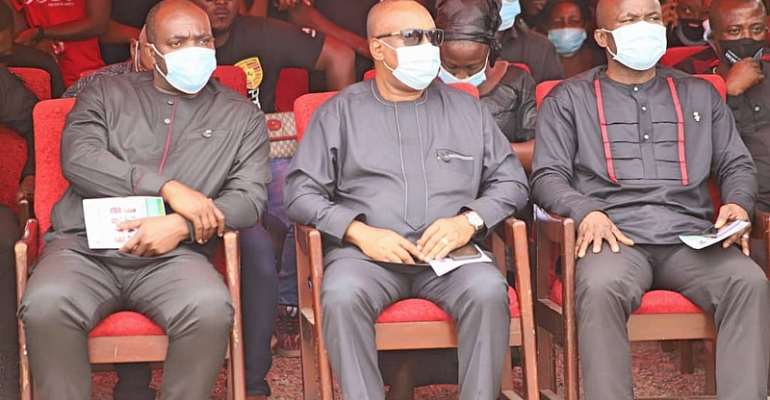 Sports Minister with other government officials

Youth and Sports Minister, Isaac Asiamah has confirmed that President Akufo-Addo-led government will honour eight juvenile footballers, who died in Offinso accident, with an ultra-modern sports stadium in the town.

The eight footballers died on Saturday, September 19, 2020, after their team, African Vision Academy, was involved in a road accident.

The mini-bus carrying the players and officials of the club landed in a river while they were travelling back to Offinso after a registration exercise at Afrancho in Kumasi.

Mr Asiamah in his address sympathised with the victims and assured them of government’s continuous support. Government bore the cost of the funeral.

“The president of Ghana has sent me to tell you that, we will build an ultra-modern sports stadium in Offinso to honor the boys and we will dedicate one room in the stadium where pictures of the victims will be put there.

Mr Asiamah also revealed that government has set up a ¢100,000 trust fund for the victims.

Government officials and officials from the Ghana Football Association [GFA] were all present to hold final rites for the footballers.

NDC Has Disappointed You For 28 Years; It's Time To Give NPP...
50 minutes ago