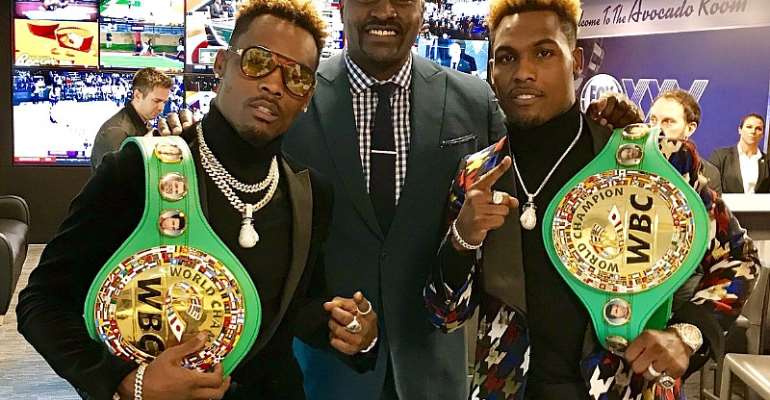 The twins, who had spoken previously of securing a legacy like the Klitschkos', left Connecticut with a combined four belts after standout performances.

It was his biggest test to date and he comprehensively passed it, extending his record to 31-0.

'Hit man' Jermall hurt Derevyanchenko in the third round and, by the end, had badly swollen both of his opponent's eyes.

Derevyanchenko's only previous two defeats came in world title challenges of Daniel Jacobs and Gennadiy Golovkin, against whom he emerged with a lot of credit.

He had previously been challenged by Chris Eubank Jr who told Sky Sports: "He is not a likeable guy. Some people say I'm arrogant or cocky but I'm a down to earth, decent guy. This guy's head is in the clouds. He thinks that he's more than he is. I would take great pleasure in taking him down a peg or two."

Jermell won his super-welterweight unification fight by stopping Rosario with a body shot.

'Iron Man' Jermell had already floored Rosario, who won a unification fight of his own in his previous outing, on two occasions before sealing victory with a jab to the body.

He now has three of the major belts at 154lbs, and a 33-1 record having avenged his sole loss to Tony Harrison