Who is Michael John Conlan – Dogboe’s Next Opponent? 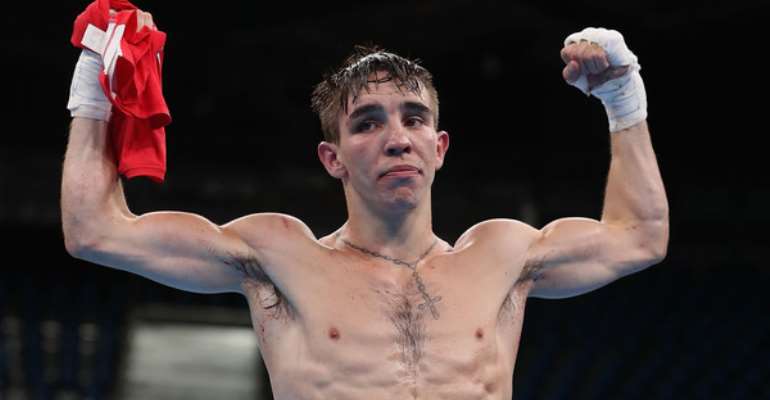 Michael John Conlan (born 19 November 1991) is an Irish professional boxer. As an amateur, he reached number one in the AIBA bantamweight world rankings, with achievements that include a bronze medal at the 2012 Olympics and gold at the 2015 World Championships.

He has been one of Ireland's most successful amateur fighters of all time. He turned professional in 2016 after misgivings with the amateur sport and had his first bout in 2017.

Conlan was born in Belfast, Northern Ireland. His father and coach, John, hails from Drimnagh, County Dublin. His elder brother, Jamie, is also a professional boxer.

Conlan won his first Ulster novice title at the age of 11 and is a three-time Irish national flyweight champion.

In his debut match at the 2012 Olympics, he defeated Ghanaian boxer Duke Micah, having received a bye in the first round. In the quarter-final, he defeated French boxer Nordine Oubaali by 22–18, guaranteeing himself a bronze medal. Conlan lost his semi-final bout against Cuba's Robeisy Ramírez, who went on to win gold in the final.

After the Olympics, Conlan would go on to win a silver medal at the 2013 European Championships in Minsk, losing to Welsh boxer Andrew Selby by 1:2.

Conlan moved up from flyweight to bantamweight and on 2 August 2014, he won the gold medal at the 2014 Commonwealth Games in Glasgow, beating England's Qais Ashfaq. Conlan won despite only returning to training two weeks prior following an injury.

2015 started off with Conlan competing in the World Series of Boxing for Italia Thunder. Conlan and his teammate, fellow Irish boxer Paddy Barnes, would compete in seven fights over 14 weeks in an effort to try and secure qualification for the 2016 Olympics in Rio de Janeiro. Conlan racked up five wins out of seven, which was just enough for him to finish second in the individual ranking and secure an Olympic berth in Rio.

In August 2015 Conlan won the European Championships at bantamweight and scooped Boxer of the Tournament. He competed in four fights beating; French, Danish, Italian and Great Britain representatives. He only lost 3 rounds out of a possible 36 on individual judges' scorecards. His final was a repeat of the 2014 Commonwealth Games final against Great Britain's Qais Ashfaq. Conlan took the first in what was a very technical encounter, the Belfast man took the second on a split, by the third round the No.1 seed (Conlan) was in cruise control which saw him take the round and the fight unanimously to retain Ireland's hold on the European bantamweight title and the best boxer award (both of which John Joe Nevin won in 2013).

Following the 2016 Olympics and his disillusionment with amateur boxing, Conlan reaffirmed his intentions of turning professional.

Despite interest from several big promotions and rumours of a deal being struck with Mayweather Promotions, it was Top Rank who secured Conlan's signature. On 23 September, Bob Arum confirmed that Conlan would be making his professional debut at The Theater at Madison Square Garden, on St. Patrick's Day.

On 17 March 2017, Conlan won his first fight as a professional boxer, beating Tim Ibarra by a third-round technical knockout (TKO) at the theatre at Madison Square Garden.

In the men's bantamweight quarterfinal stage of the 2016 Summer Olympics in Rio de Janeiro, Conlan was eliminated by a controversial call, in which Russia's Vladimir Nikitin was awarded the victory.

Conlan reacted by raising his middle finger at the judges and delivering a strongly-worded live television interview to RTÉ, accusing officials in amateur boxing of corruption.

That decision was one of a number that had fellow international boxers and commentators questioning the integrity of Olympic boxing and the scoring system used.

Conlan was found placing bets on boxing events at the 2016 Summer Olympics, violating the IOC rules. Accordingly, he was sanctioned with a severe reprimand by the Disciplinary Commission of the IOC.

In his eleventh professional bout, Conlan arrived in Madison Square Garden with the song Celtic Symphony playing and some of the crowd chanting "Ooh ahh, up the 'Ra". Some, including Northern Irish former world champion Dave McAuley, called for action from boxing regulatory bodies. The niece of an IRA bombing victim suggested that Conlan had "glorified terrorism" and criticised the boxer by suggesting he was the antithesis of other boxers like Barry McGuigan and Carl Frampton who had always strived to keep a cross-community spirit in boxing.[31] Promoter Barney Eastwood echoed McAuley's sentiment, saying it "should never have been allowed to come about". Politicians and boxing coach John Breen also suggested that Conlan will have lost support because of it.

Conlan subsequently apologised for his "misjudgement" in using Celtic Symphony as his ring-walk music.