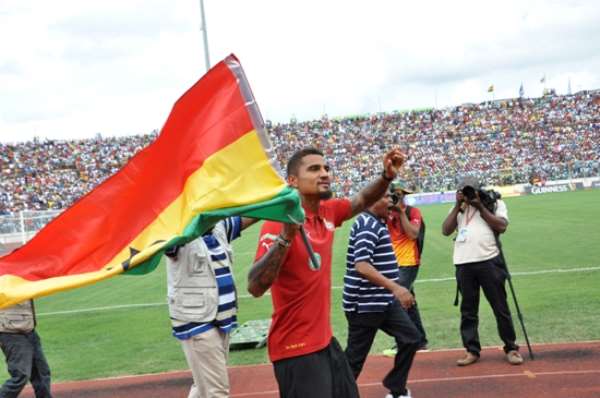 Ghana star, Kevin Prince Boateng has expressed readiness to offer support to the families of the juvenile players who died in the Offinso road accident a week ago.

Eight players of African Vision Soccer Academy have been confirmed dead after a minivan travelling with 24 colts players to a registration centre veered off the road and fell into the Offinso river leaving six players to die at the spot.

The news came as a shock to the country with FIFA, CAF and other football clubs all expressing their condolences to the families.

And according to Boateng, he is ready to support the families of the victims.

"I heard about it and it really made me sad," he told Joy News.

"I first saw it on Social Media and I called a friend to find out if it was true. He told me about it and I felt really really sad because I have kids of my own, one is 12 and one is 6 so it's a big tragedy and it hits me hard.

Four of the dead young footballer have been buried, the other four will also be given a mass burial on Thursday.

"Like I said I head it on the news and that is why I am here, I want to help," Kevin said.

"Anything that is necessary, I want to help. I want to get in touch with the families. I want to give them the necessary support to feel free. I know it's hard, and I know how hard it is for parents to bury their children," added the 2010 World Cup star.

The injured players aged between 12 and 15 have now been discharged and will undergo a restorative seminar from the FA and a medical team from the Komfo Anokye Teaching Hospital.

Meanwhile, Kevin Prince Boateng on Monday completed his move from Serie A side Fiorentina to Serie B newcomers AC Monza.

Government have also said they will foot the hospital bill and funeral expenses.