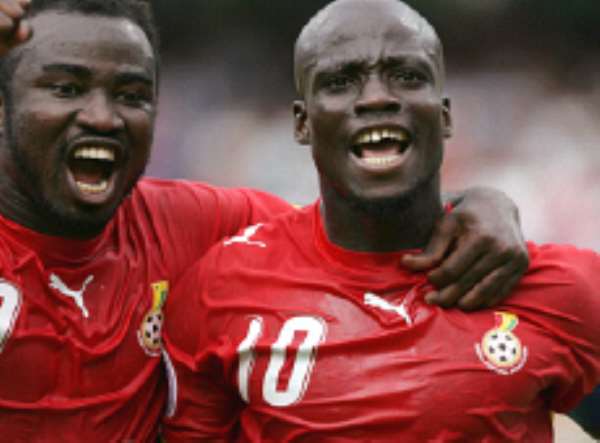 THE off-the-beaten-track performance of the senior national football team, Black Stars, has made them perhaps, the most attractive side in world football.

From a 'shaggy-dog story' prior to the Germany 2006 World Cup, the Stars now seemed to have convinced all that they are possibly the side that carries Africa's biggest hope of lifting the Mundial trophy for the continent, come South Africa 2010.

Only last Wednesday, a display of composed football saw the high-ranking Ghanaian team steamroll Asian champions, Japan, 1-0 in an international friendly at the Nissan Stadium in Yokohama.

It was a performance that oozed pretty patterns on the pitch as Skipper Stephen Appiah, Michael Essien, Laryea Kingson and new entrant, Junior 'Hi-life' Agogo did their own thing.

Ninety-six hours later at the Seoul World Cup Stadium, the swash-buckling Stars once again turned the hit on South Korea, crushing them 3-1 before a capacity crowd. It was exactly the same score when the two sides crossed swords last June.

A source at the Ghana Football Association (GFA) yesterday hinted the Times Sports that its offices have been flooded with a cocktail of invitation from crack football nations.

Among the countries that are queuing up for a showdown with the Stars are Germany, three-time world champion and five-time conquerors Brazil.

Five-time African champions, Egypt, Nigeria and Cote d'Ivoire are all reported to have put in a request to savour the Stars' new-found winning formula.

Indeed, since the summer's World Cup when it carved a niche for itself as the only African team to advance past the group stage, the Stars have been magnificent, accounting for fellow World Cup debutantes Togo 2-0 in yet another practice game played in England.

Ghana are host of the 2008 Nation Cup and need more games to be battle-ready.