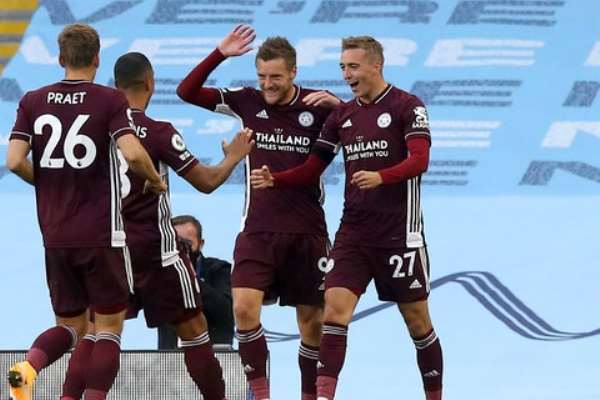 Jamie Vardy hit a hat-trick as Leicester exposed Manchester City's defensive flaws with a stunning 5-2 win at the Etihad Stadium on Sunday.

Pep Guardiola's side went ahead after just four minutes thanks to Riyad Mahrez's thunderous strike.B

ut that was as good as it got for City as Vardy tore Guardiola's creaky defence to pieces with his pace and superb movement.

Kyle Walker's foul on Vardy led to a penalty that the striker converted himself before the break.

Vardy struck again with a fine finish in the second half and netted another spot-kick after being fouled by Eric Garcia.

Youri Tielemans' penalty made it five, sealing Leicester's third successive victory and leaving City bruised after their most embarrassing league defeat under Guardiola since a 4-0 loss at Everton in 2017.

For the first time ever, Guardiola saw one of his teams concede five goals in his 686th game as a manager with City, Bayern Munich and Barcelona.

It was the first time City had conceded five goals in a home league game since 2003 against Arsenal – a devastating setback after their win at Wolves in their Premier League opener last Monday.

City looked even worse at the back than last season despite the signing of Bournemouth centre-back Ake.

Amid reports City could be about to sign Benfica centre-half Ruben Dias, Guardiola could have been forgiven for rushing to seal the deal once the final whistle blew.

While it is too early to write off City's title hopes, they will need to improve significantly if they are overhaul champions Liverpool.

With Gabriel Jesus joining Sergio Aguero on the sidelines due to injury, Guardiola was without an experienced central striker.

As he did in the Champions League win against Real Madrid last season, England midfielder Phil Foden filled the role up front as a false nine, but he struggled to make an impact.