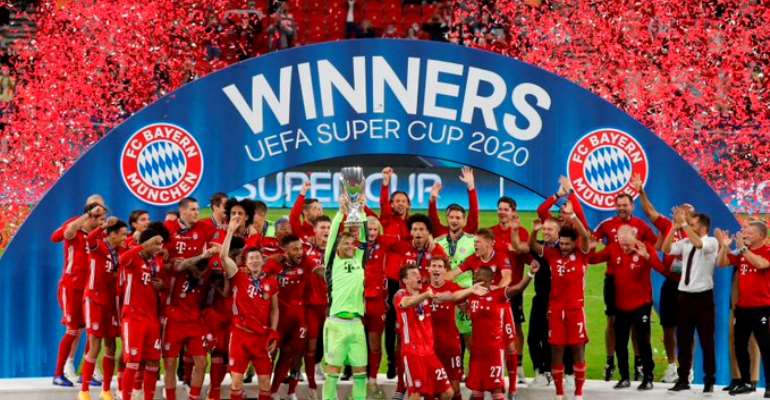 Substitute Javi Martinez struck in extra time as Bayern Munich emerged victorious in the UEFA Super Cup against a brave Sevilla side in front of over 15,000 supporters watched on in Budapest.

Hans-Dieter Flick's side have now won 23 consecutive games and extend their unbeaten run to 32 as they won the trophy for the first time since beating Chelsea on penalties in 2013.

The Europa League winners stunned Bayern with a 13th-minute penalty, converted by Lucas Ocampos after David Alaba fouled Ivan Rakitic, who was making his debut on his second spell at Sevilla.

However, normal service was soon resumed as Leon Goretzka levelled the scores in the 34th-minute, the midfielder side-footing home after a lovely Robert Lewandowski assist.

Lewandowski and Leroy Sane both had goals chalked off in the second half as Bayern hammered on the door, but despite withstanding almost relentless pressure, this remarkable Sevilla side almost won it at the end of normal time only for Youssef En-Nesyri to be denied by a fine Manuel Neuer save.

En-Nesyri also struck the post in extra time, while at the other end Joshua Kimmich spurned a good chance for Bayern, before Martinez - potentially in his last game for the club - struck just five minutes after coming off the bench to win the game, as Bayern claimed their first trophy of the season and fourth of the calendar year.