Carabao Cup: Havertz Hat-Trick Sees Chelsea Progress To Next Round 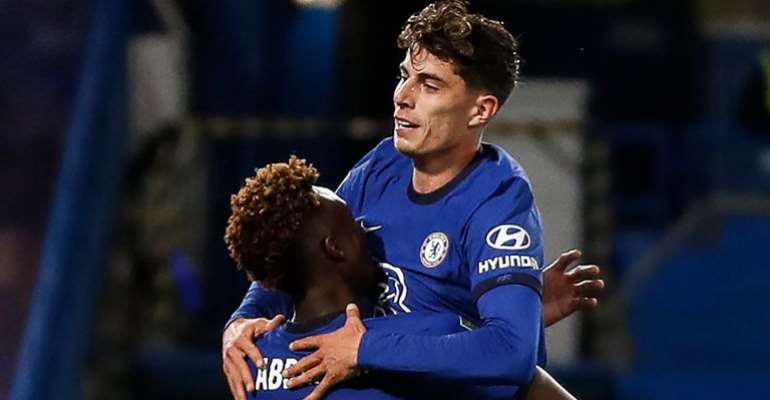 Kai Havertz's hat-trick in Chelsea's Carabao Cup thrashing of Barnsley will be the "first of many great nights" for him, says Blues boss Frank Lampard.

It was the 21-year-old Germany international's first goals for the club after arriving from Bayer Leverkusen for £71m earlier this month.

Tammy Abraham put the Blues ahead and had a role in all of Havertz's goals.

Ross Barkley and Olivier Giroud were also on target as the hosts eased into the fourth round at Stamford Bridge.

"I'm delighted with Kai," said Lampard.
"It was everything I wanted the night to be for him. Because Kai has had no pre-season and signing for the club took a few days out for him as well."

Havertz's hat-trick was the first of his senior club career and he has now been involved in 26 goals in all competitions in 2020, scoring 18 and making eight assists.

Only Robert Lewandowski (35), Lionel Messi (32) and Cristiano Ronaldo (31) have been involved in more goals among players in the top five European leagues.

"Tonight was a great exercise for him to see how we want to work off the ball, for him to be a part of that," added Lampard.

"He made a great recovery tackle for Ross' goal, and then to also just have some freedom on the ball and roam in more central areas.

"I thought it was a great combination with Tammy and I was pleased with the way he grew into the game in terms of confidence. It was a great night for Kai, and the first of many for him."

The Blues will visit either Tottenham or Leyton Orient in the next round.

Spurs' game against the League Two side was called off on Tuesday after several of the Leyton Orient squad tested positive for coronavirus.

Discussions are ongoing over the implications of not holding the third-round match on Tuesday, with a further update to be provided in due course.

Havertz was one of only three players to keep their places from the Chelsea side beaten 2-0 by Liverpool at the weekend.

Central defender Thiago Silva was one of those brought in by Lampard as the 36-year-old former Paris St-Germain made his first appearance for the club.

The Brazilian enjoyed a relatively comfortable hour before making way, but it was Havertz who stole the limelight.

Barnsley's Cauley Woodrow had forced Willy Caballero into a fine save with a curling effort from distance early on.

But once Abraham pounced on some sloppy defending to slot past former Blues goalkeeper Brad Collins in the 19th minute, the game looked beyond the Championship side.

Havertz then latched on to Mason Mount's pass after a clever Abraham dummy and slid left-footed effort into the bottom corner to open his Chelsea account.

Barkley made it three after the break before Abraham's neat flick teed Havertz up for a simple finish inside the area.

The attacking midfielder walked in a third after beating keeper Collins to another Abraham pass, and was then replaced by another new signing in left-back Ben Chilwell.

Debutant Chilwell, who joined from Leicester City last month, swiftly offered a glimpse of why Chelsea were prepared to pay £45m for him as he whipped in a cross for Giroud to add the hosts' sixth.

Defender Antonio Rudiger was not included in the squad with Lampard saying not to read "too much into those selections".

"That he was not in the squad, that's just a choice at the moment, with the centre-halves I have I can't have them all in the squad," he added.