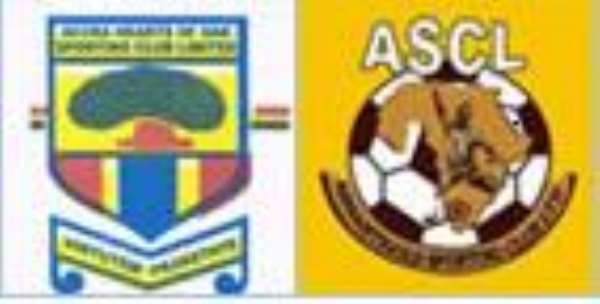 Two Ghanaian premier league sides, Ashantigold Sporting Club and Accra Hearts of Oak Sporting Club Limited will this evening jet out of the country for South Africa to participate in a one-day special four-club invitational tourney.

The tournament, Macufe Cup, which features two clubs from South Africa, Bloemfontein Celtic and Mamelodi Sundowns, takes place on Sunday, and each participating team is guaranteed a $5,000 appearance fee.

Of the two Ghanaian teams, it is Accra Hearts of Oak that has had the opportunity to feature in a competition in South Africa. It was the 2001 edition of the Vodacom Challenge, which featured another Ghanaian club, Kumasi Asante Kotoko alongside two South African teams, Kaiser Chiefs and Orlando Pirates.

The Phobians placed fourth in that competition, but on Sunday when they trot onto the pitch to do battle against one of the South African teams, they will be seeking to erase whatever bad memories they have of the Vodacom Challenge.

Ashantigold, who appear to be rediscovering the form that saw them trample on other Ghanaian clubs three years running when the Ghanaian league went professional, will be participating for the first time in any tourney in South Africa. But they have promised to leave an indelible mark on the minds of South Africans.

Last Wednesday, they fought grittily, coming from a goal down to beat Liberty Professionals 2-1 in a 5th week league match. That hard fought victory catapulted them to the summit of the league table after losing that position to Asante Kotoko for three days.

My mother is not dead — Farouk Mahama
39 minutes ago