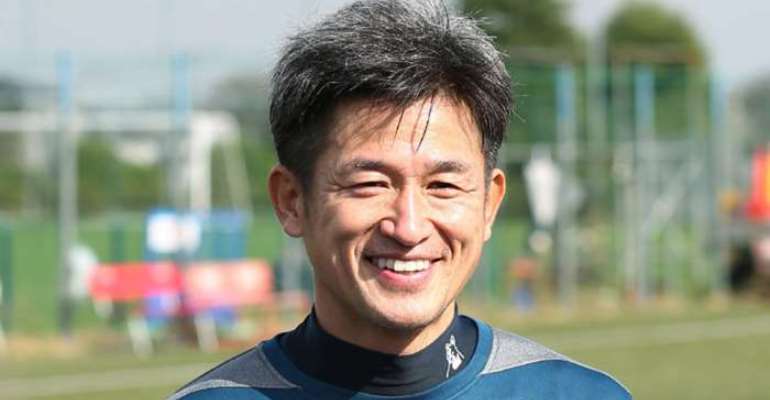 Kazuyoshi Miura has become the J-League's oldest top-flight player ever by starting for Yokohama FC at the age of 53 on Wednesday.

The forward was named in his side's starting lineup against Kawasaki Frontale at 53 years, 6 months and 28 days of age, breaking the previous record of 45 years, 2 months and 1 day set by Masashi Nakayama with Consadole Sapporo in 2012.

Miura, who is known as "King Kazu," wore the captain's armband and played 53 minutes before being taken off in a game that Frontale eventually won 3-2.

"When I stepped onto the pitch, I felt a deep desire to fulfil my duty and harness everyone's feelings in that armband," Miura said after the match.

The former Japan striker wasn't the only notable veteran to play for Yokohama in the match, with 39-year-old Daisuke Matsui and 42-year-old Shunsuke Nakamura also featuring in the game.

Miura had been previously named on the bench for one other Yokohama match this season and made his first appearance on Wednesday in his club's 18th game of the season.

It was Miura's first appearance in a first-division J-League match since 2007 after Yokohama were promoted from the second division following last season.

“Kazu, congratulations on becoming the J1’s oldest player,” J. League Chairman Mitsuru Murai said in a statement. “This is surely the fruit of your strenuous efforts to stay fit as a professional player.

“This great record, which will surely live on in Japanese soccer history, will shine a light on what lies ahead for other players as well as children who hope to become soccer players one day.

“The world sees you continuing your challenge, and your presence is our pride. I look forward to even more activity from you in the future.”

Miura made his professional debut in Brazil as a teenager and has since embarked on a 37-year career that has included stints in Italy, Croatia, Australia as well as with several Japanese sides.

Internationally, Miura made his debut with Japan in 1990 and went on to earn 89 caps for his country, scoring 55 goals.