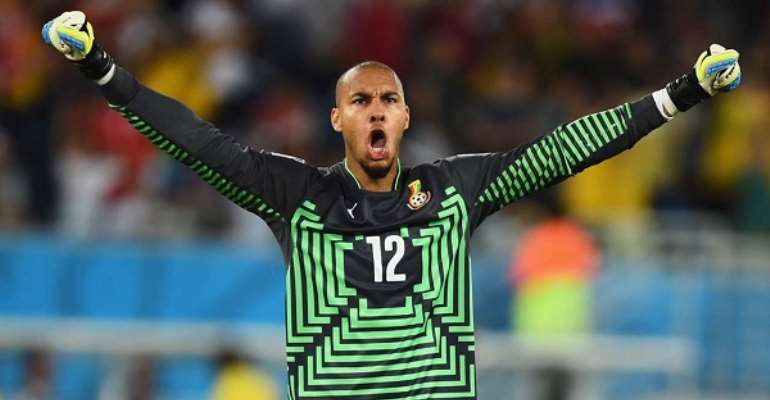 Norwegien born switched his nationality to play for the West African country.

Kwarasey was a member of Black Stars team that participated in the 2012 Africa Cup of Nations (Afcon) and the 2014 FIFA World Cup in Brazil.

He was in post when Ghana lost to the United States of America 2:1 in their opening group game in Natal.

However, he was axed to the bench for the after it was alleged that some key members of the team told coach James Kwesi Appiah for his lack of understanding of any of the Ghanaian languages.

Nii Odartey Lamptey who played for the Black Stars in the 1990s was discussing Ghana’s attempt to lure Brighton star Tariq Lamptey who is one of many young footballers the country is courting says Adam Kwarasey has regretted playing for Ghana.

“I know where Kwarasey came from and all that. If Kwarasey decides to open his mouth and tell you what he went through… He regrets playing for Ghana”, Odartey told Akoma FM

He said until the players are assured of their comfort during and after their footballing careers, they will ‘never’ pick’ Ghana ahead of those countries.

“These children monitor social media a lot so you can’t tell me he’ll let go the benefit he will enjoy from England and play for Ghana. I wish it will happen but I’m telling you point blank it will be very difficult for a player nurtured outside to play for Ghana.

“It will never happen because they look at the benefit and consider what they’ll go through in Ghana and no one will choose what we go through. I may be wrong but there is no way we can convince these guys.

Another player that Ghana was chasing was Anderlecht winger Jeremy Doku and Odartey has revealed why the youngster chose Belgium over Ghana.

“I went to Belgium and I met Doku and his parents and we had interactions. You could feel his parents didn’t want him to play for Ghana. If you look at the difficulties some players who switched nationality to Ghana …,” he added.