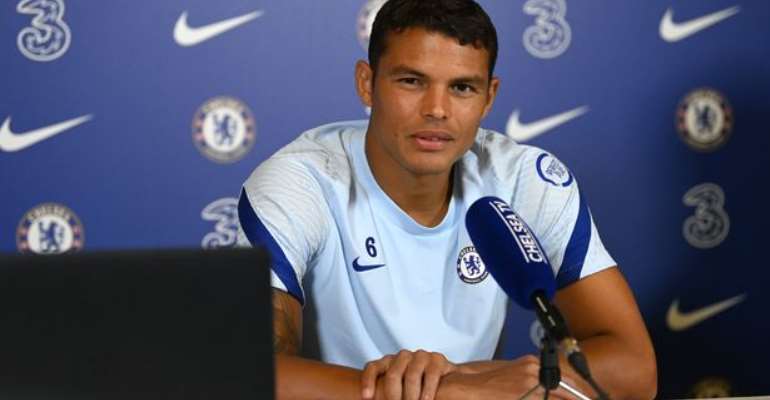 Chelsea defender Thiago Silva says he is not worried by the speed of the Premier League - despite turning 36 the day before his debut for the club.

Silva will play in Wednesday's Carabao Cup third-round tie at home against Championship side Barnsley (19:45 BST).

“Age is just a number on your document," he said on Tuesday.

"I don't worry [about the speed of the Premier League] at all.

"Physically, I feel very young and I’m very well prepared for this. People who know me know how much I love my work; how I put in 200%.

“This is a great opportunity that Chelsea and Frank Lampard have given me and I don't want to let them down."

As well as seven Ligue 1 titles, Silva also helped PSG reach the Champions League final in 2019-20, though they were beaten 1-0 by Bayern Munich.

The former Fluminese player also won a Serie A title with AC Milan in 2010-11.

"I'm coming here as an older player so I see that as Chelsea and Frank Lampard wanting a player with my experience," added Silva.

"I'll use the words of how [Everton boss] Carlo Ancelotti described [new signing] James Rodriguez: 'If you want someone to run we could sign Usain Bolt.'

"I hope to help these young players with this new adventure."

At his first news conference since his transfer, Silva revealed he had no previous ambition to join a Premier League side because of "long-ball" football, which he says has now improved in England's top flight.

He also explained his delight at meeting the teenage boy who rose to fame after rapping the song Thiago Silva at Glastonbury in 2019.

Silva said: "I've never really seen myself in the Premier League before because I saw it as a difficult style of football. I didn't have any desire to play here.

"My impression of the football played was of long balls, long shots and, at the time, I couldn't see myself playing in that championship. I can play that way, but my preference was to play with the ball on the ground.

"I've seen that the championship has developed tremendously, there is a lot more technical quality. Little by little, it has won me over."

On the song, he added: "It was a very unusual situation because I’d never heard of the song before and then after the festival, there was the video of the lad, Alex [Mann], coming up from the crowd and wearing my PSG shirt, before it went viral.

"I had the opportunity to meet Alex and thank him, because sometimes we as footballers lose the idea of how far a reach and influence we have.

"It was a really happy moment. I remember that day well."

JHS graduate appeals for $45,000 to undergo kidney surgery
55 minutes ago