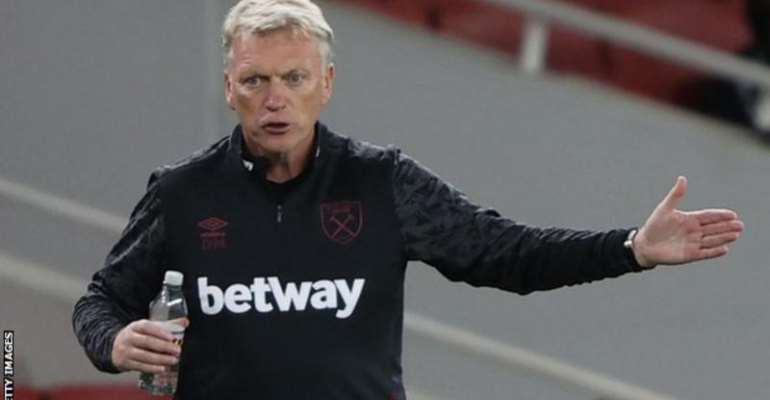 The club were informed of the positive tests while preparing for Tuesday's home Carabao Cup tie against Hull City - which the Hammers won 5-1.

"The manager and both players immediately left the stadium and have returned home," said a club statement.

West Ham said the three men were all asymptomatic and assistant manager Alan Irvine took charge of the Hull match at London Stadium, which both Diop and Cullen were due to start.

In a statement after the defeat, Hull City said: "We are satisfied West Ham followed all guidelines and protocols upon receiving the positive results and, after consulting with the EFL, were comfortable with the game going ahead.

"The club will continue to stringently monitor the well being of our players and staff as per Public Health England and EFL guidelines - as we have done since they were put in place - and we wish the West Ham manager and players the very best."

Public Health England guidelines state those with Covid-19 should self-isolate for at least 10 days, meaning Moyes, Diop and Cullen will not be able to attend training or the league game against Wolverhampton Wanderers on 27 September.

BBC Radio 5 Live's John Southall said the trio travelled to the ground with the squad in two or three separate coaches.

"They say they all social distanced, the squad, from when they met up and throughout the journey," he said.

"As soon as they arrived, the results from the tests done yesterday came through and the two players and the manager were isolated immediately in separate rooms and left the ground very quickly, I'm told.

"West Ham say they are satisfied nobody else in the squad needs to self-isolate and that is why the game went ahead."

The news comes after Leyton Orient v Tottenham Hotspur in the EFL Cup third round on Tuesday was called off because a number of the home players had contracted coronavirus.

It came on the day the government announced a raft of new coronavirus restrictions for England which could last for up to six months.

As part of the stricter rules, Prime Minister Boris Johnson has confirmed plans for fans to return to watch live sport events in England from 1 October will not go ahead.

Sports bodies have been told not to expect spectators at stadiums and venues until the end of March at the earliest.