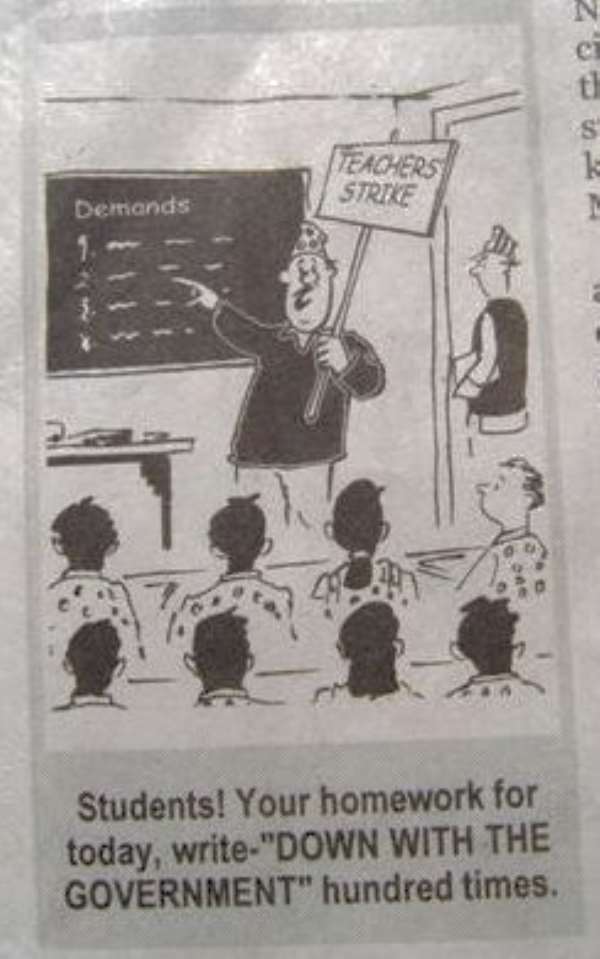 THE PRESIDENT of the National Association of Graduate Teachers (NAGRAT), Mr. Kwame Alorvi, has assured members of the Association that NAGRAT executives would not call off their nationwide strike action if government does not meet their proposals.

To this end, he has called on all members of the Association not to sit on the fence, but be part of the strike action to bring justice to the teaching profession in order to make the profession a noble choice to others.


Mr. Alorvi gave this assurance during a meeting of the striking NAGRAT teachers in Takoradi, and urged members to let their absence in the classroom be felt so it would be known that "your office is very important".

The President however took on the Deputy Minister of Education in charge of Basic Education, Mrs. Angelina Baiden Amissah, who was reported to have told Kyzz 89.7 FM in Takoradi that the teachers had embarked on the strike action demanding to be given the same salary as health professionals.

The Minister, also on the same radio station, reportedly accused NAGRAT executives of fueling the Upper West Region GNAT (Ghana National Association of Teachers) members, who had thrown their weight behind the former's strike action when the station drew her attention to it.

According to Mr. Alorvi, such remarks by the Minister were unfortunate and as such rendered her dishounorable, and that the Association had never asked for the same salary structure as health professionals, nor had they fuelled any strike action by members of GNAT as the Minister had claimed in her interview with the radio station.

According to the President, the Association's argument was that the disparity in the salary structure between graduate teachers and health professionals was too wide, and that something ought to be done about it, since they the two were all in the same salary structure.

According to him, the Association concedes that it took a longer time for a doctor to be trained, but clarified that "our problem is with the disparity in the salary structure".

He however reiterated that the Association had embarked on the strike action for three basic reasons: that the Memorandum of Understanding signed between the Association and the Parliamentary Select Committee on Education last year was implemented; the Director General of Ghana Education Service (GES), Mr. Michael Nsowah, was removed from his current position; and finally that the disparity in the salary structure was resolved.

The Vice President of the Association, Mr. Christian Adei-Poku, noted that the only way the graduate teacher could be liberated from the chains of poverty was for them to continue with their strike action.

According to him, the battle to secure better salaries and service conditions was a battle of both cowardice and bravely.

He therefore asked the members of the Association to choose between the two.

Mr. Anderson, Assistant Headmaster of Ghana Secondary Technical School (GSTS), who chaired the meeting and described the strike as a "kill-me-slow strike", noted that the timing of the strike was perfectly arranged to would make it difficult for any powers that be to outwit them.