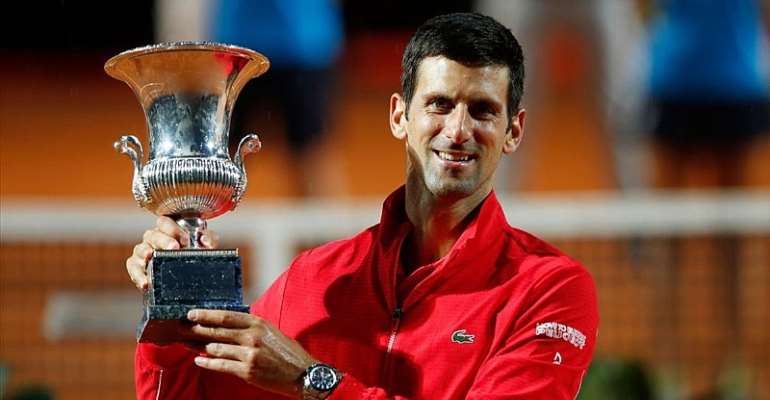 Playing in his first tournament since disqualification from the US Open, Djokovic recovered from a 3-0 deficit in the opening set to win 7-5 6-3 and move one ahead of Rafael Nadal in all-time Masters wins.

It is also the fifth time Djokovic has won the Rome Masters and his fourth title of 2020.

"I don't think I played my best tennis throughout the entire week, but I think I found my best tennis when I needed it the most, in the decisive moments, today, yesterday, practically every match. That makes me definitely very satisfied and proud," said Djokovic.

Djokovic won 12 of the last 14 points to seal victory, having struggled in the early stages.

Schwartzman showed no signs of tiredness from his three-hour semi-final win over Denis Shapovalov the previous night as he broke twice in the opening three games to move 3-0 ahead.

But as rain started to fall, Djokovic’s level improved and he reeled off four games in a row.

Having won a fantastic point with a forehand winner down the line, Schwartzman had a chance to break Djokovic at 4-4, but failed to convert after reaching a drop shot.

Schwartzman saved a set point in the next game with a sweeping forehand cross-court winner, only to follow up with a sloppy service game at 5-6 that cost him the opening set.

A break to start the second set offered hope for Schwartzman, but he was immediately broken back and then could not convert two more break-point chances in the fifth game as Djokovic held from 15-40.

While Djokovic did not seem happy with his performance - laughing during one changeover - he broke to love to take control and then secured the win with a drop shot.