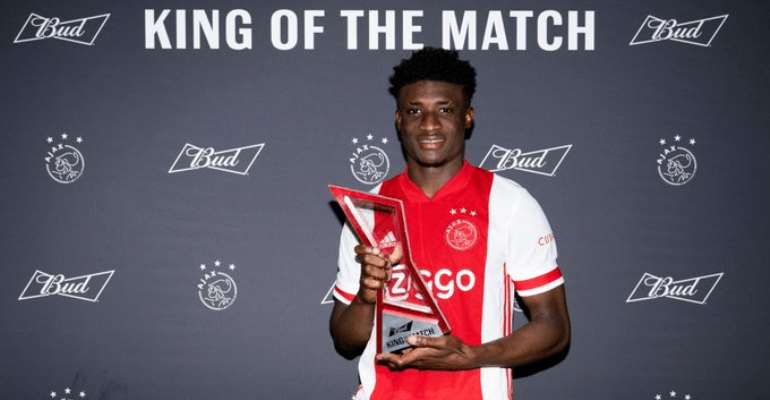 Kudus Mohammed made his official debut for Ajax in their 3-0 thrashing of Waalwijk at the Johan Cruijff Arena on Sunday in the Eredivisie.

The youngster who joined Ajax this summer for €9m from Nordsjælland and watched Ajax’s first game against Sparta Rotterdam on the bench made his first official appearance against Waalwijk on Sunday.

The 20-year-old played full throttle and was impressive throughout the game.

Ajax opened the scoring in the 10th minute through Dusan Tadic, the Serbian international was the quickest to react to a rebound.

Kudus in the 29th minute took the first yellow card of the game, the burgeoning midfielder took one for his team when he brought Ahmed Touba down to stop a goal clear scoring opportunity.

Ajax made it 2-0 in the 35th minute, a defense splitting pass from Kudus found Noussair Mazraoui on the right flank who teed up Labyad to make it 2-0.

Waalwijk in the 68th minute were reduced to 10 men, Luuk Wouters was sent off for committing a last-man challenge on Labyad.

Ajax rounded the game off in the 73rd minute, Lisandro Martinez scored to make it 3-0.

Kudus nearly had his goal in the 85th minute, a powerful shot from the edge of the box was calmly saved by the goalkeeper.

The game ended 3-0, Ajax continue their impressive start to the new season. Kudus Mohammed was named man of the match for his stellar display.