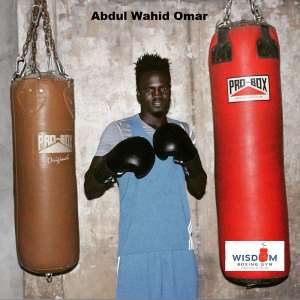 Ghana Olympic Committee (GOC) Communications Director in charge of social media had an exclusive chat with Abdul Wahid Omar who was Ghana only representative in boxing at the 2016 Olympic Games in Brazil.

His story of rearing poultry and animals while training has already been told, just like when he was discouraged to box due to his slim figure.

He has become of Africa’s best amateur boxers and participated at many international tournaments. Wahid is looking up to Ghana to participate in the world qualifiers towards the 2020 Olympic Games to see if he would be able to make it the second time. He is very hopeful and confident of qualifying.

Wahid: Yes I'm preparing very hard for the next qualifiers. Due to the fact that I couldn't make it at the previous qualifiers although I reached quarterfinals stage, I'm going all out because the Olympics means a lot to me and I can't afford to lose this chance. I've been working hard underground waiting for the pandemic to go so I can get back to the ring and Insha Allah I will make it this time.

Wahid: In fact, Covid 19 has really affected me in so many aspects.no fights, no group training to determine whether you improving or not and also affected me a lot financially. I pray it pass away so things can get better.

it wasn't easy being the only rep at the Games because I missed my team, the cheers and other stuff. but the experience at the Olympics Games has given a tremendous push in my boxing career as at now, although I didn't get the decision to progress to the next stage of the competition. But everyone who watched the fight saw that I won.

Wahid: Many thanks to the Almighty for how far he's brought me, also to my parents for their efforts, also to my brother Habib Ahmed. God bless you, to my coach Dr Ofori Asare for his efforts in my career, God bless you, coach. Also to all coaches who has helped me till now, I appreciate u all. Again to my fans and people who support me in various ways, keep supporting the brand. God bless all.

Hmm, for now, my main focus is qualifying for the Olympics 2020 / 2021in other to make a big mark there. It is after this Olympic cycle before I will see what's next.