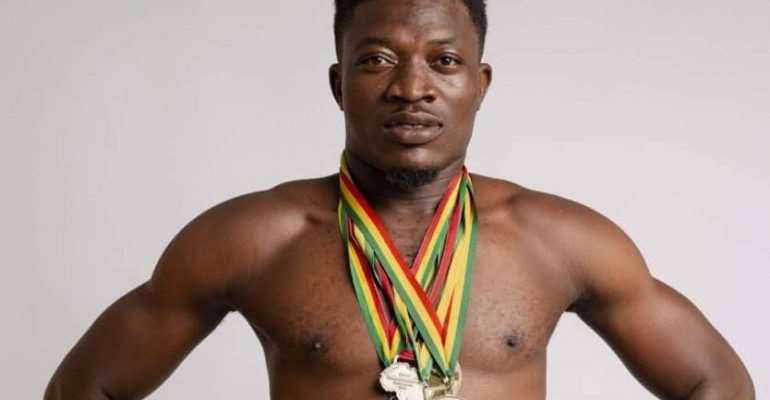 Joshua Abu Quartey who hopes to represent Ghana in the 2021 Olympic Games in Tokyo had an exciting encounter with the sports media general, who is also the Communications Director of the Ghana Olympic Committee (GOC) and the Ghana Boxing Authority (GBA).

“I’m very happy and appreciative for this opportunity to chat with a legend. It has been my dream to represent my country of Ghana in the Olympics. But this is just the beginning. With help from Peter my new manager and Uncle Ike, I will accomplish my dream of becoming a world champion” expressed Quartey.

The 24-year-old Black Bomber who represents Ghana in the 152-pounder in the amateurs, with a compiled record of 89-5, said he wants to maintain that weight division when he turns a professional.

He started boxing at the age of 10 training with older brothers at Bukom, before joining the Wisdom Boxing Club (WBC) under national trainer, Dr Ofori Asare and won several local and regional tournaments before being invited to the Greater Accra Regional Team.

He has competed in the Ghana National Championships three times, winning two silver medals, and a gold medal in the 2018 event to earn a call up to the national boxing team.

After gaining the experience at the Africa and Commonwealth Games, his next target is the Olympic Games.

“I have learnt a lot in defeat and in victory so I know what sports is all about. I just want to accomplish my dream of representing Ghana at the world championship or Olympic Games.

He believes it is a gift of the family that they are born champions,

He is self-motivated and knows his dream will come true with a bit of hard work.

His goal in boxing is to be known as one of the world’s best boxers from Ghanaian Africa. The Quartey family will soon reign over the boxing world again.