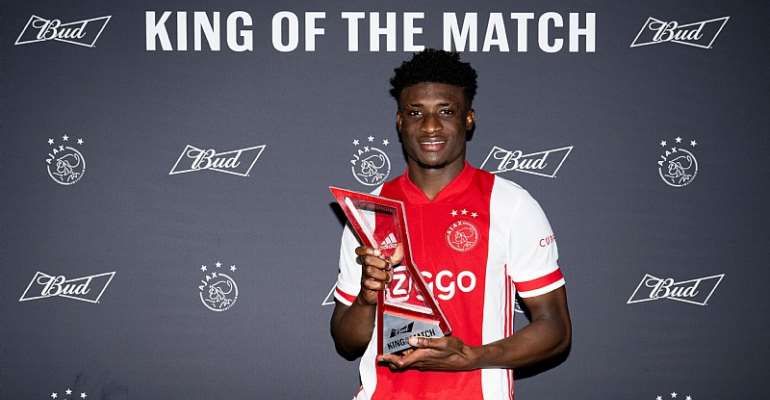 Highly-rated Ghana attacker Mohammed Kudus has been adjudged Man of the Match for his outstanding display for Ajax in the team’s 3-0 win against RKC Waalwijk in the Dutch Eredivisie.

Last week during the Amsterdam-based club’s Matchday 1 fixture against Sparta Rotterdam, the Ghana sensational watched from the bench as his team cruised to a 1-0 win.

Today, Mohammed Kudus was handed a starting role by his manager Erik ten Hag as he made his first bow in the Dutch Eredivisie.

The 20-year old did not disappoint but displayed his quality in fine fashion to help Ajax record a second successive win in the 2020/2021 League season.

First, Dusan Tadic opened the scoring for the home team after just 10 minutes of play before Zakaria Labyad added a second a few minutes after the half-hour mark.

Then in the second half, a continuous excellent display from Ajax resulted in the third goal which was scored by Lisandro Martinez after he was assisted by Dusan Tadic.

Assessing the performance of players at the end of the game, Mohammed Kudus has been voted the ‘Man of the Match’ on the back of the impressive statistics he merited from SofaScore.

The 1992 constitution is a tool for stealing, rigging and pl...
12 minutes ago

[Video] I joined #FixTheCountry demo because my Church membe...
41 minutes ago