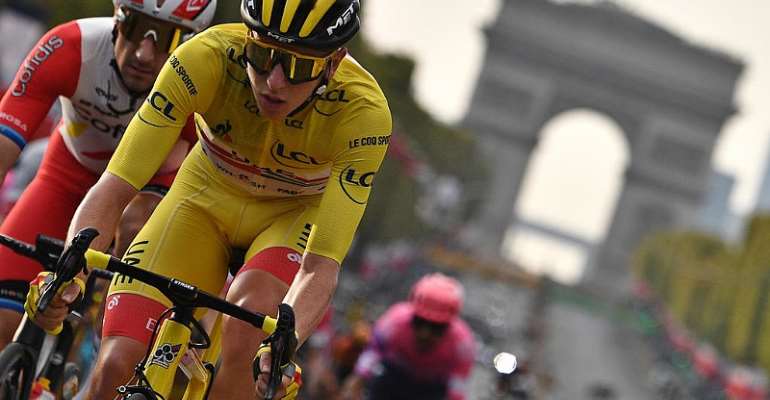 Tadej Pogacar's already the stuff of legend. In second place, 57 seconds behind the tour leader going into the 36.2km time trial on the penultimate stage and emerging 59 seconds ahead.

What Pogacar did to Primoz Roglic on Saturday, 19 September during stage 20 of the 2020 Tour de France, will be told forever and a day in cycling clubs throughout their native Slovenia and doubtless elsewhere around the globe.

A stunning piece of power pedalling.
Pogacar's chance appeared to be over after stage 17  between Grenoble and Méribel Col de la Loze when he came third shedding 15 seconds to Roglic. Seasoned observers said the tour had been decided. Pundits.

And they appeared to be right. Roglic's Jumbo Visma team tightened its grip over stages 18 and 19 and the lead of 57 seconds remained the same following that moment in the mountains.

Pogacar finished the course between Lure and La Planche des Belles Filles in a wondrously symmetrical 55 minutes and 55 seconds.

Roglic, for so long the imperturbable veteran, was adrift. The 30-year-old looked like yesterday's man as he completed his course in fifth.

Not at all fine. Within sight of Paris, the treasure belonged to another.

Despite his despair, Roglic magnanimously went over to congratulate his adversary.

Surprise
“I don't know what to say,” said Pogacar after his anointment. I'm really proud of the team. They did such a big effort on the way to get the yellow jersey on the final day. We were dreaming that from the start and we achieved it.

Not bad for a lad from the tiny commune of Komenda. But then he does have form.

Worthy achievements. But the Tour de France, all 107 years of it, is in another stratosphere.

Comeback
Pogacar pulled off the most remarkable turnaround at the business end of a Tour de France since Greg Lemond eclipsed Laurent Fignon in the final time trial in 1989 Tour to claim overall victory by eight seconds.

Three decades later, the collapse in the Vosges highlighted the vagaries of cycling. A powerful team can control and dominate but if all that containment fails to annihilate, it can be spectacularly and sumptuously subverted in a moment of dazzle and dare.

Jumbo Visma, the best team, did not - when it mattered - posess the best man.

Pogacar, who won three stages in the 2020 race, was Mr Transcendant without having the best men around him.

Accolades
The new supremo rode into Paris on Sunday, 20 September with tribute aplenty glittering across his handlebars.

After nearly 90 hours of cycling over 2,500km of France, he was the busiest during the prize-giving ceremony.

First there was the medal for the polka dot jersey denoting that he was the "king of the mountains" - the best rider up and down the slopes. Then  another round of photos and baubles in the white jersey of the best rider under-25. And then the fabled yellow jersey.

An explosion of accomplishments for a cyclist whose time was destined to come. But not quite yet.

Pride
"This is incredible," said Pogacar on the podium. "Standing here on the first step ... I never thought I would do it.

"I've had three fantastic weeks with a French public who never stopped supporting me. I don't have the words to describe my emotions."

Race organisers will be proud of managing to pull off the three week event which was postponed from its traditional dates in July due to the coronavirus pandemic.

Though no cyclists were forced to quit with the illness, race director Christian Prudhomme, went down with the disease and stayed away from the event for a week as he recovered.

He returned to witness the most thrilling of denouements: Pogacar, the youngest winner of the race since the Frenchman Henri Cornet in 1904.

That the victory comes a year after the 22-year-old Colombian Egan Bernal claimed the main prize, suggests a breathtaking rivalry for perhaps the best part of a decade.

By then the French hosts might have come up with a few contenders of their own.