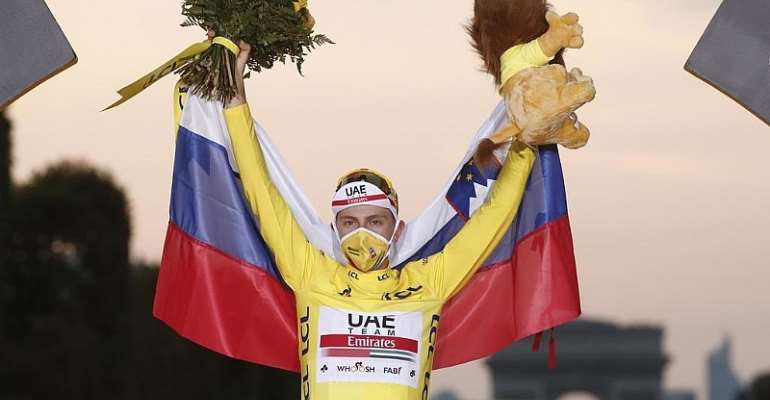 Competing in the world's most prestigious race for the first time, the UAE Team Emirates rider is also the youngest man to sport the yellow jersey at the end of the race since a 19-year-old Henri Cornet in 1904.

"This is incredible," said Pogacar. "Standing here on the first step of the podium on the Champs Elysées ... I never thought I would do it.

"It was an incredible three weeks. I want to thank the hard work the tam put in, my famly and everyone who supported me."

Fellow Slovenian Primoz Roglic, who for two weeks wore the leader's vest until a meltdown on the penultimate stage, was second and the 35-year-old Australian Richie Porte came third.

Stage 21
The de rigueur sprint finish along the Champs Elysées was claimed by Sam Bennett who also won the green jersey for the most points.

The 29-year-old Irishman crossed the line after completing the 122km 21st stage between Mantes-La-Jolie and Paris in two hours, 53 minutes and 32 seconds.

"To win this final stage and get the green jersey is the highlight of my career," said Bennett.

Mads Pedersen was second and Peter Sagan was third.

The main story was further back though. Pogacar, who will celebrate his 22nd birthday on Monday, traversed the 3,482.2km of the 2020 Tour de France in 87 hours, 20 minutes and five seconds.

His 30-year compatriot was 59 seconds behind and Porte was three and a half minutes off the pacesetter.

"They're from another planet," said Porte of the two Slovenians.

The younger of the duo, who also won the polka dot jersey as "king of the mountains" and the white jersey as the best rider under-25, was also from a different universe.

COVID-19: Ashanti Region records 783 cases in one week
11 minutes ago