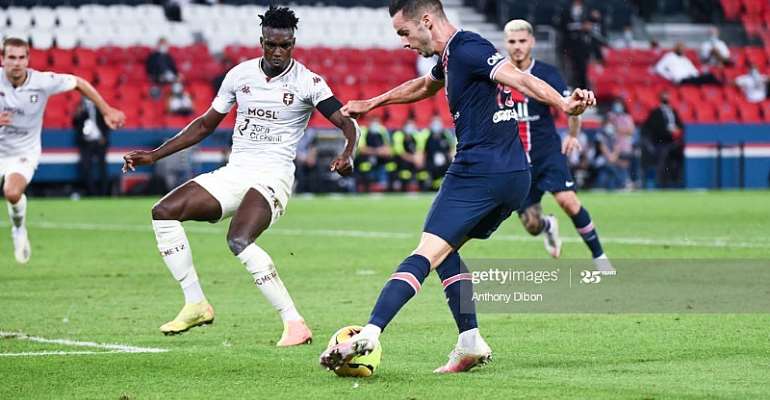 Ghana defender John Boye hugely impressed for his FC Metz outfit on Wednesday night when the team lost narrowly by a goal to nil to Paris Saint-Germain in the French Ligue 1.

The two clubs were in action at the Parc des Princes yesterday in a Matchday 3 fixture of the ongoing football season.

On the Matchday, John Boye earned a starting role for FC Metz and enjoyed a very good game. Not only did he strengthen the defense of his team but his commanding play was deserving of the captain’s armband he wore.

At the end of the 90 minutes, the center-back finished with a decent rating of 7.1 from Modernghana Sports statistics providers SofaScore.

The rating is the third-highest by any FC Metz player on the night and the fifth-highest among the players that feature for the two teams combined.

Following an encounter of many duels, PSG cruised to a 1-0 win courtesy a strike from Julian Draxler in added time. The win is the first for the French Ligue 1 champions and the third defeat for FC Metz since the start of the new season.

John Boye, 33, has featured in all 3 games of his team this season and will hope they start winning games as soon as possible to ensure they don’t get stuck in the relegation zone.

Up next for the side, they are scheduled to take on Stade de Reims on Sunday.