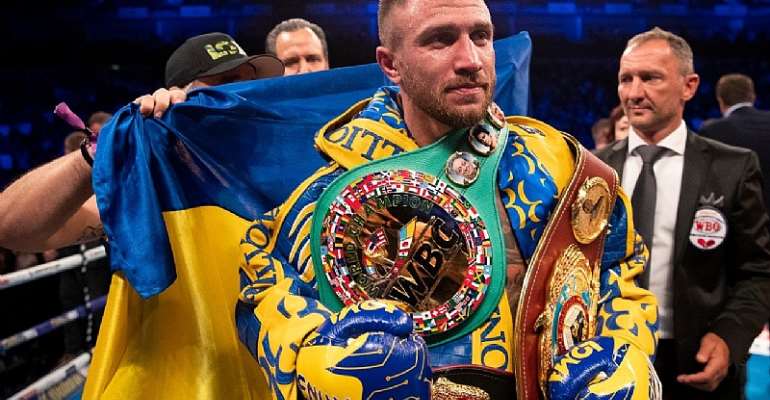 Top Rank came out with the fight poster on Sunday for the Vasily Lomachenko vs. Teofimo Lopez clash on October 17th on ESPN. The sign, which has both lightweight champions Teofimo and Lomachenko facing off, it’s very well done.

The poster title is, ‘Winner takes all,’ and it looks like a beautiful work of art by the creator.

WBA/WBC/WBO lightweight champion Lomachenko (14-1, 10 KOs) and IBF champ Teofimo (15-0, 12 KOs) meet next month on regular ESPN on October 17th in a fight fr the undisputed 135-pound championship at ‘The Bubble’ at the MGM Grand in Las Vegas, Nevada.

Top Rank is presenting a great fight, easily the best of 2020, for free on ESPN. This won’t be a pay-per-view, which is an excellent move for the boxing fans. Typically, a clash like Lomachenko-Lopez would go for over $70+.

For example, look at this month’s Charlo twins card on Showtime. The asking price for that card is $74.95, and none of the fights on the card on the same level as Lomachenko vs. Teofimo.

“I love that fight,” said Lou DiBella to SecondsOut about the Lomachenko vs. Lopez fight. “Which I’m very happy about [Lomachenko-Lopez being free in the U.S].

“People talk about the ratings this week. There was a better PBC rating this week, but the ratings have been weak because of the free programming; I’m not criticizing it because these are tough economic times.

“To get that quality of a match-up [for Lomachenko vs. Teofimo], that I would have paid $60 to $70 without arguing about it, to get that on regular ESPN is wonderful. That will be the biggest night of boxing the United States will have this year, and I’m looking forward to it.

“I think it’s a terrific match-up. I’m going to call the upset with Teofimo. I love Lomachenko; he’s one of my favorite fighters, but I think at 135 with both of the guys, Teofimo is NOT going to walk into the ring at 135.

“He’s going to be huge. I think as great as Lomachenko is, I don’t think he’s one of the most physically strongest lightweights out there, and I think Teofimo is.

“The reason I’m going to take Teofimo as an underdog is that I think he is a shot to hurt Lomachenko,” Dibella said.

A lot has been made about Teofimo’s size advantage over Lomachenko, but in reality, he’s not going to outweigh him by much, if any. Teofimo takes a lot of muscle weight off in getting within ten pounds of the 135-pound limit.

At best, Lopez might be around 147 on the night of the fight. He’s not going to be in the 150s as some boxing fans think he will. The real advantage that Teofimo has is his power. He hits a lot harder than Lomachenko, and he has better hand speed.

Lomachenko, 32, will be fine as long as he can make sure that Teofimo never catches him with anything with full power.

“It hasn’t happened often that Lomachenko has been hurt,” said DiBella. “It has happened very infrequently, but I think Teofimo has a chance to hurt him. I think he comes into the fight with piss and vinegar and self-confidence.

“Obviously, if Lomachenko wins, will anyone be shocked? No, he’s one of the best fighters and maybe the best fighter in the world. But I love that fight, and I’m really looking forward to it.

“I’m also looking forward to the Charlo-Derevyanchenko fight. I think that’s going to be a terrific match-up,” said Lou.

Lomachennko cannot let himself get hit by the same type of punches that the young 23-year-old Teofimo landed on Richard Commey and Diego Magdaleno.

Those type of punches will damage to Lomachenko, and he won’t last long if he gets nailed by more than a small handful of those shots in the entire fight.

If Teofimo can hit Lomachenko more than ten times per round at 100% power, this could be a short night. Lomachenko wouldn’t be losing the fight due to his age or the wear and tear that he has on him.

His loss would be a result of him getting hit by someone that should arguably be campaigning at 140 already. Again, the size won’t be Lomachenko’s problem in this fight.

It’s going to be the speed and power that Teofimo has going for him. Lomachenko, getting hit by someone like Teofimo, would have given him problems even earlier in his career.

Lopez hits harder than most fighters, and Lomachenko hasn’t had to deal with anyone like that.