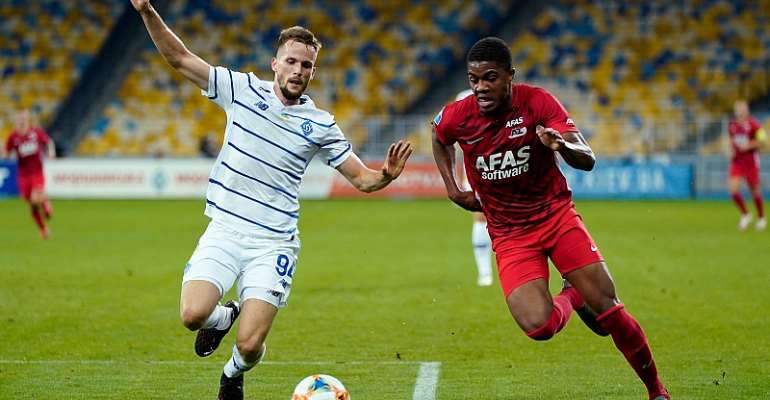 Dutch teenager Myron Boadu featured for AZ Alkmaar on Tuesday evening when the team lost 2-0 to Dynamo Kyiv in the third qualifying round to next season’s Uefa Champions League.

The Eredivisie club visited the Stadion NSK Olimpiyskiy today to honour a date with the Ukrainian opponent having progressed from the second qualifying round.

Hoping for a win to ensure they advanced to the next stage of the qualifying round, AZ Alkmaar has stumbled to a Dynamo Kyiv side that had too much in their locker.

The host after a goalless draw in the first half hit the ground running in the early parts of the second half when they took the lead through a strike from Gerson Rodrigues on the 49th minute.

Though AZ Alkmaar put up a good fight, they failed to score and conceded again on the 86th minute. This time around, Mykola Shaparenko found the back of the net with an assist from Tomasz Kedziora.

Myron Boadu, 19, played full throttle for AZ Alkmaar in the defeat and will now miss playing in the Uefa Champions League for the 2020/2021 football season.