The AFCON Final That Made Sunday Oliseh Cry 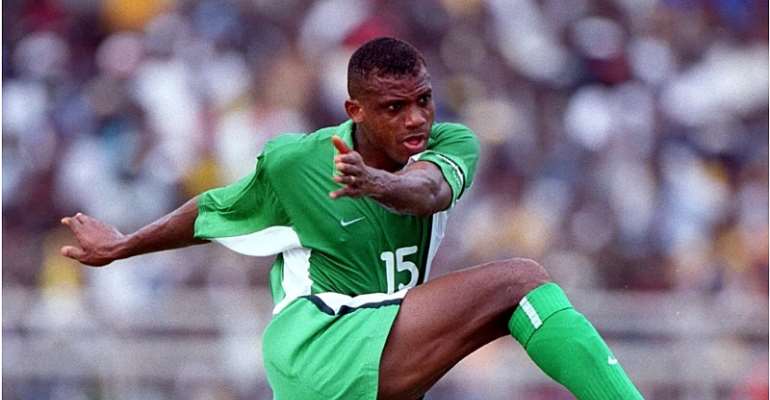 African football giants Nigeria have won the Total Africa Cup of Nations (AFCON) thrice. The 1980 success on home soil was the first and they had to wait for 14 years to clinch their second in Tunisia (1994), and then a further 19 to claim victory in South Africa (2013).

The West Africans have also been losing finalists four times; 1984 (Cote d'Ivoire), 1988 (Morocco) and 1990 (Algeria), but it was the 2000 loss at the AFCON they co-hosted with Ghana that is regarded as the most painful.

“I have mixed feelings about the 2000 AFCON because as the host nation, we did our best to get through to the final but it was very sad the way we lost it,” tournament skipper Sunday Oliseh, who was part of the squad that won the tournament in 1994 told CAFOnline.

“We not only lost the trophy but it was as if something had been taken away from us. We felt sad because it could have been a wonderful gift to the fans on home soil especially since we had invested so much in the tournament,” Oliseh adds on.

Nigeria had to come from a two-goal deficit to force a penalty shoot-out, which they eventually lost against Cameroon’s talent-endowed Indomitable Lions.

Samuel Eto’o and Patrick Mboma gave Cameroon a healthy 2-0 lead to put them in the driver’s seat.

But, Nigeria pulled one back just before the breakthrough Raphael Chukwu before Jay-Jay Okocha levelled matters after the interval to send the game into extra time and with no winner, the tie was decided from 12 yards out.

In the resultant penalty shootout, Victor Ikpeba's fourth spot-kick was ruled out by referee Mourad Daami and captain Rigobert Song stepped up to score the decider, Cameroon winning 4-3. It was heartbreak for the home side in front of their fans.

It was more painful for Oliseh as he had invested everything as captain to ensure the Super Eagles soared at home. In the quarter-final against Senegal, a sickly Oliseh had to come off the bench to set up a late equalizer as Nigeria went on to win the tie.

“Nothing but the love for my country made me come off the bench against Senegal. I had malaria and was dehydrated at the same time too and I was not even supposed to be on the bench,” Oliseh explains.

Adding; “But Coach Jo Bonfrere insisted I should be on the bench because my presence ‘would boost the team’s spirit’. We were losing some minutes to the end of the match when I was introduced. It was a risk but it was never going to be an option for Nigeria to go out of the competition at that stage.”

Despite the heartache that pierced through their flesh that day, Oliseh admits that the Indomitable Lions squad that had the fearsome striking force of Eto’o and Mboma as well as skipper Song was truly lion-hearted and deserved to be crowned champions of Africa.

"They had Eto’o who gave us a lot of problems with his pace and they also had a sold midfielder in the late Marc Vivien Foe with my friend, Rigobert Song in the central defence," said Sunday Oliseh.

“In the end, they won the trophy and they deserved it. We can make all the noise now but the cup is theirs. Cameroon had a very solid team. They had Eto’o who gave us a lot of problems with his pace and they also had a sold midfielder in the late Marc Vivien Foe with my friend, Rigobert Song in the central defense,” Oliseh recalls.

There has been comparison between Nigeria’s 1994 title winning squad and the 2000 generation, but Oliseh is frank in his assessment.

“The 1994 squad had more quality; they had more personality in terms of the caliber of players in the team and their mentality was totally different. That notwithstanding, the 2000 squad was also a solid side though it was a team that was re-built after the breakup of the Super Eagles,” he says.

Oliseh goes on to claim that the squad that started off in 1994 was good enough to clinch both the 1996 and 1998 AFCON titles, but they couldn’t compete as they boycotted the former in South Africa and subsequently banned for the latter in Burkina Faso.

“Though you can never be sure of anything in football but with the type of team we had in 1996, it was most probable that we could have won the AFCON in 1996 and 1998,” noted Oliseh who earned 54 international caps with the Super Eagles in a career spanning almost a decade.

Since his retirement from football in 2006, Oliseh been involved with coaching both at the club and national team level. He started his coaching career Belgian third division side Verviers’Under-19 team.

He graduated to the first team as chief coach before being named chief coach of another Belgian Third Division side, RCS VISE.

Oliseh was named Nigeria head coach in 2015 but left in acrimonious circumstances despite leading the team to the 2016 Total African Nations Championship (CHAN) in Rwanda.

It was an equally stormy phase when he switched back to club football with Dutch top tier side Fortuna Sittard.