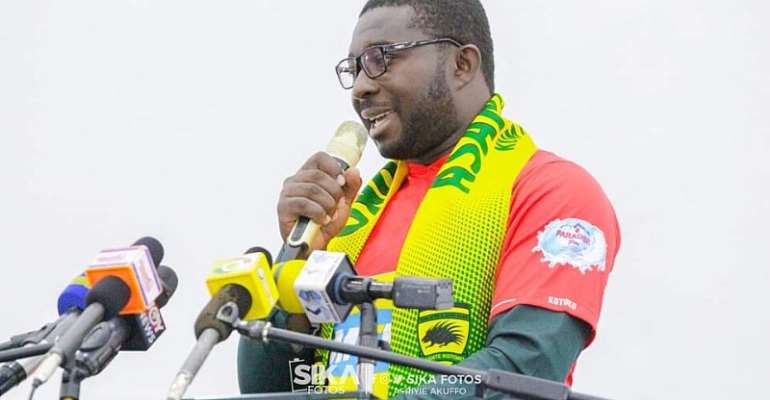 Last week, there were series of reports suggesting the entire Asante Kotoko Board of Directors want to resign due to cracks.

The 12 member board have been given a task by Manhyia Palace, the seat of Otumfuo Osei Tutu II to achieve but have somehow dominated the headlines for the wrong reasons.

However, Nana Yaw Amponsah, a fast-rising football administrator was seen as the man fit for the Chief Executive Officer [CEO] role at the club following the exit of George Amoako.

There was supposed to be an unveiling of a new Kotoko management which would be led by Nana Yaw Amponsah but reports shockingly emerged that the unveiling of the new management team has been rescheduled due to impasse among some members of the board.

Deep throat says Nana Yaw Amponsah wants to work with people he can but Manhyia and some board members are refusing to give him that permission to bring in his people.

In the past, Manhyia has been appointing an accountant to work for the club but Nana Yaw Amponsah, who has been awarded a three-year deal as the CEO wants to fight that and appoint his own to be the accountant for the club.

The former Phar Rangers boss and the 2019 Ghana Football Association presidential candidate is determined to fight the old system and implement his own systems and ideas at the club as the CEO.

On Sports Revive on Saturday on Joy New, Atta Poku, a renowned journalist who works with Kumasi based Wontumi FM, cautioned Nana Yaw Amponsah to accept how the structures at the club work.

“Nana Yaw Amponsah must be careful about these constant media leaks,” Atta Poku warned on the show, revealing that a picture has been painted of a petulant CEO whose style is to run to the media at the least opportunity.

“It is true that Kotoko may have ways of doing things that aren’t the best, but Nana Yaw must try to work with what he has and improve on them as he goes because for now, he is being a cast as a disrespectful young man,” Atta Poku noted.

However, on Adom TV, Jerome Otchere, a former editor for the Kotoko Express also implored the board to allow Nana Yaw Amponsah to bring in his own people to work for the interest of the club.

“I don’t see why you appoint a Chief Executive Officer and you still dictate to him,” Jerome said on ‘Agron ne Fom’.

“Nana Yaw Amponsah is a competent man and knows what is good for Kotoko so it would be in the interest of the board to give him a free hand to work.

“No one work with an enemy. Allow him to work and when he fails, then you can hold him accountable but when he is being forced to work people he does not know or like, anytime there is an issue, he will blame the board.

“Nana Yaw Amponsah clearly doesn’t want people to be imposed on him because he is in to work for the club and achieve a task. I believe the board must sit down with Nana Yaw Amponsah to settle any differences because all is not lost,” he added.

Bismark Owusu Bempah ‘Ayala’, who was also on Sports Review also stressed he does not see Nana Yaw Amponsah leaving his position.

According to him, it would be a disrespect to Otumfuor and Asanteman.

“The Kotoko CEO position is not one you can easily resign [from]. Doing that is considered disrespectful to Otumfuor. Nana Yaw will seriously need to convince Otumfuor for that decision to be accepted.”

It’s unknown when the inauguration of the new management will take place.

Meanwhile, Asante Kotoko have confirmed their participation in the 2020/21 Caf Champions League in which Nana Yaw Amponsah is expected to lead the club.