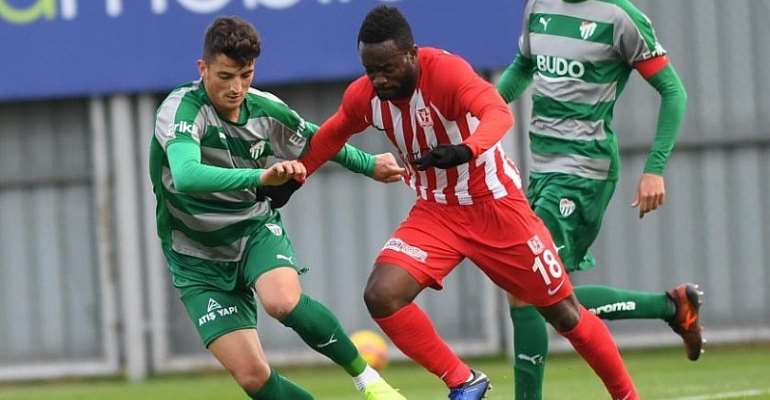 Ghana striker Mahatma Otoo hit a brace on Monday evening to inspire his Balıkesirspor club to a crucial 3-1 win against Giresunspor Klübü in the Turkish FF 1.Lig.

The forward had a rather quiet pre-season but has started off the 2020/2021 football season with a bang.

In a crunch season opener between Balikesirspor and Giresunspor Klübü at the Balikesir Atatürk Stadium, Mahatma Otoo earned a starting role to lead the attack of the home team.

The hardworking attacker displayed excellent form and finished off a good performance in the first half with the vital goal that sent the host into the break with the lead.

After recess, the Ghana attacker continued to terrorize the defenders of the opponent and managed to score again on the 74th minute to complete his brace.

In added time, a pulsating end to the game saw Emir Dede scoring to wrap up an emphatic 3-1 win for Balıkesirspor while Muhammed Ertürk netted the consolation goal for Giresunspor Klübü.

Having played full throttle for the winners, Mahatma Otoo earned a rating of 8.1 from Modernghana Sports Statistics providers SofaScore. The ratings of the former Hearts of Oak forward is the highest by any player, making him the best player by far on the evening.