'No Rift With Nana Yaw Amponsah' - Kotoko Board 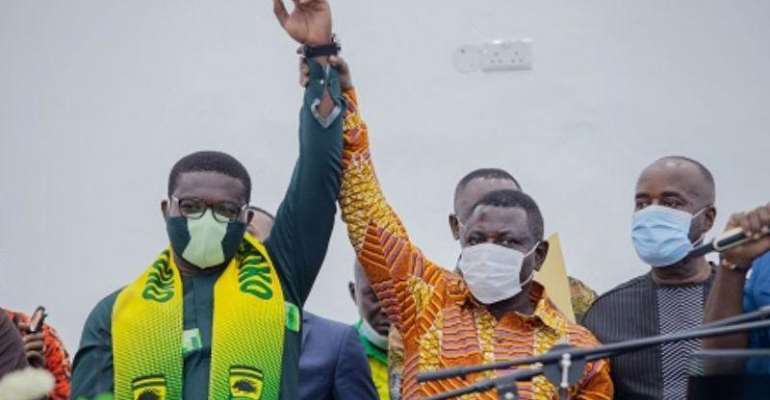 Kotoko CEO, Nana Yaw Amponsah with Chairman of the Board, Dr Kwame Kyei

The Board of Directors of Asante Kotoko have denied reports suggesting that there is an internal rift in the club.

Multiple reports emerged last week suggesting that there are cracks within the management. Many beleives that the rift led to the postponement of the unveiling of the management team.

However, a source in an interview with Graphic Sports Online said the board was at a loss about the latest development and wondered what that clear falsehood was meant to achieve.

According to the source, there is still a cordial working relationship between the directors and the CEO, Nana Yaw Amponsah.

He further urged the Kotoko supporters to treat the rumours with the contempt it deserves and rally behind them to help achieve their objectives.

"As far as I'm concerned, there is no iota of truth that there is a rift between the board and the CEO," the source said.

"Nothing of that sort has ever happened so the board members are wondering what whoever is behind that fabrication is trying to achieve," it stressed.

"It's unfortunate that something like this is coming up at this early stage where all the board members are committed to make Kotoko great again.

"But though it is quite disturbing, the board members are still focused on the task assigned them by the Life Patron of the club, Otumfuo Osei Tutu II," the source revealed.

Rumours were rife in the past week that the new CEO of Kotoko, Nana Yaw Amponsah, clashed with some members of the board during a recent board meeting, leading to a threat by some directors and the CEO to resign.

Nana Yaw Amponsah has been awarded a three year deal as the Chief Executive Officer of the club.