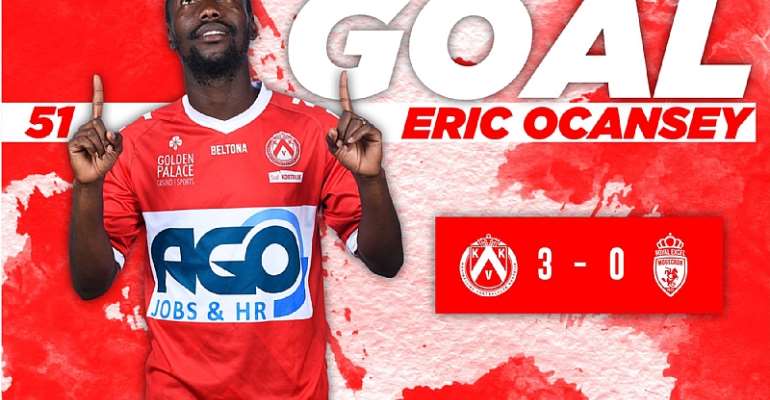 Ghanaian youngster Eric Ocansey scored for K.V. Kortrijk on Sunday to wrap up a 3-0 win for the team in their encounter against Royal Excel Mouscron in the Belgian Pro League.

The winger enjoyed a very successful campaign with his club last season after joining the side from Eupen in the summer transfer window of 2019.

Having started the 2020/2021 Pro League season on a good note, his manager kept faith in his qualities yesterday when K.V. Kortrijk hosted Royal Excel Mouscron at the Guldensporenstadion.

The home team had an outstanding game and cruised to a 3-0 victory as the opponent suffered the full consequences of having 2 men being sent off.

After the goalless first half, K.V. Kortrijk returned from the break with a plan to make use of the numerical advantage. Fortunately, they had the men and took the lead through Ilombe Mboyo on the 59th minute.

Four minutes later, Ilombe Mboyo assisted Gilles Dewaele to score to double the lead for the side.

Later on the 83rd minute, exciting winger Eric Ocansey put the icing on the cake for K.V. Kortrijk when he scored the third for the side to ensure they run away with all 3 points.

On the Matchday, he played 86 minutes against Royal Excel Mouscron before making way for Pape Habib Gueye.

The 23-year old has so far featured in all 5 matches for his team this season and is expected to be key throughout the campaign.