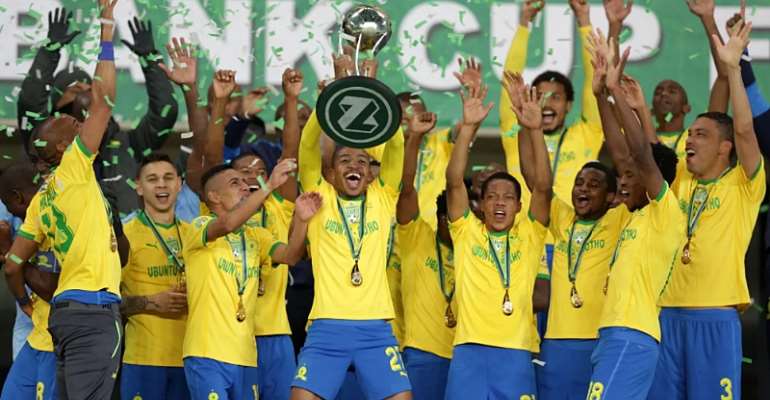 The curtains officially came down on the 2019/20 season of the South African football, with Mamelodi Sundowns completing a historical treble, claiming the Nedbank Cup title after defeating Bloemfontein Celtic 1-0 in the final played at the Orlando Stadium on Saturday (12 September 2020).

Uruguayan Gaston Sirino scored what proved to be the game’s lone strike 11 minutes from time, to give The Brazilians their third Nedbank Cup title, as they completed a domestic treble, having already bagged Premier Soccer League and Telkom Knockout titles before.

After an evenly balanced clash played behind closed doors as per Covid-19 restrictions, Pitso Mosimane’s side confirmed their dominance on South African football with an impressive performance to cap what has been an outstanding season for the Brazillians.

Themba Zwane, a strong contender for player of the season, was the first to test Sipho Chaine between posts for Celtic, after beating his marker but his shot went wide off the mark.

Both sides had an equal share of possession in the opening stanza but rarely troubled each other. After 30 minutes Lebohang Maboe found Zwane whose shot was blocked by the oncoming Chaine.

Uruguayan Sirino who had a rather quiet first half for his standards went one on one with the keeper at the 38th minute but opted to lay the ball off to Zwane who could not connect following the keeper’s clearance.

With most of the threat coming from the league champions, Celtic almost went into the break leading right at the end. A corner kick found Victor Letsoalo unmarked, but his header was fisted over the bar by Dennis Onyango.

After the break, it was Sirino’s moment of brilliance that almost broke the deadlock with a sublime curler that kissed the woodwork in the 56th minute.

The opener did eventually come in the 79th minute, thanks to a good combination involving Zwane and Sirino which ended by a wonder strike by the Uruguayan from the edge of the box to find the bottom corner and give his side the lead.

Sundowns were given a scare in the dying minutes after a long ball found Mzwanele Mahashe, who headed across the goal to find Fikizolo, but his close-range effort was denied by Onyango.

Wandisile Letlabika could have sent the game into extra time after a scramble in Sundowns’ defence following a corner found him unmarked, but his shot went over the bar in the game’s last chance. The final whistle meant Sundowns were crowned Nedbank Cup champions for the third time.