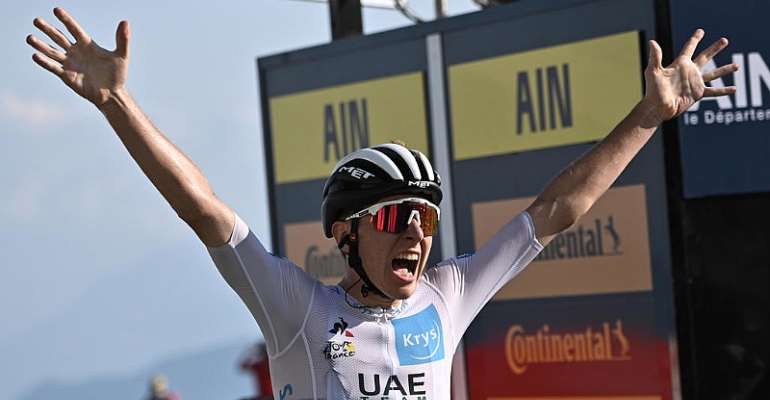 Tadej Pogacar has beaten fellow Slovenian and overall leader Primoz Roglic to claim stage 15 of the Tour de France as 2019 champion Egan Bernal all but abandoned his title defence.

Bernal was dropped 13km from the finish at the top of the Col du Grand Colombier, an unforgiving 17.4-km ascent at an average gradient of 7.1%, and lost more than seven minutes on the line.

Two-time runner-up and fellow Colombian Nairo Quintana also quickly lost contact with the leading group led by Roglic's Jumbo-Visma team mates, who set a frantic tempo from the bottom of the climb.

Pogacar, however, was the freshest man in the finale as he outsprinted Roglic for the victory at the end of a punishing 174.5-km trek in the Jura mountains.

"Tadej is very strong, I have to say he has great legs. My team mates did a great job today as I really wanted to win but I have to admit Tadej was slightly stronger," said Roglic, who still had the support of team mates Tom Dumoulin and Sepp Kuss with two kilometres to go.

"Today was a tough day, Jumbo-Visma controlled the race and set super high temp. A lot of riders were dropped and I wanted to focus on the finale," said the 21-year-old Pogacar.

Roglic leads Pogacar by 40 seconds and Colombian Rigoberto Uran by 1:34 as the race is turning into an all-Slovenian affair following Bernal's disappearance.

Bernal, who was third overall 59 seconds off the pace before the start in Lyon, dropped out of the top 10, meaning Ineos-Grenadiers, formerly known at Team Sky, will not win the Tour for the first time since Chris Froome crashed out in 2014.

They had won all the other editions since Bradley Wiggins became the first British winner of the race in 2012.

Bernal had been looking under par in the first part of the race and Sunday's stage confirmed that impression as the 23-year-old zig-zagged up the road, sweat dripping from his face, while Jumbo-Visma's Wout van Aert pulled the shrinking peloton.

"They were setting a really high pace. Nobody stood a chance," said Pogacar.

There was no coming back for the Colombian, who was paced up to the line by team mate Michal Kwiatkowski.

Adam Yates was the only rider to attack, seven kilometres from the summit, but the Briton's effort was short-lived as he was reined in seemingly effortlessly by the Jumbo-Visma led pack one kilometre further.

In the final 300 metres, Porte launched the sprint but Roglic and Pogacar followed easily and the younger Slovenian prevailed to win his second stage on his Tour debut.

'It's Ridiculous, I’ve To Be Dealing With This Group Since 2...
2 minutes ago

152kg Of Cocaine Busted At Tema Harbour
13 minutes ago