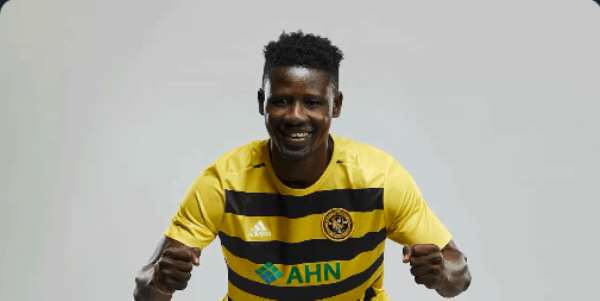 Ghanaian youngster Ropapa Mensah continued his fine form on Saturday night as he bagged a brace to help Pittsburgh Riverhounds SC cruise past Hartford Athletic with a 5-0 win.

The striker has been sensational in the USL Championship this season and looks like there is no stopping him from finding the back of the net.

Yesterday at the Highmark Stadium, Ropapa Mensah was in action for his Pittsburgh Riverhounds outfit and did deliver once again.

He netted his first goal against Hartford Athletic on the 27th minute to double the lead for the home team after they had led with a strike from Ryan James on the 13th minute.

A few minutes to end the first half, Anthony Valverde scored from the penalty spot to send Pittsburgh Riverhounds into the break for the big 3-0 lead.

In the second half, the in-form Ropapa Mensah looked sharper and finished off a good day at the office with a second goal after the hour mark after he was assisted by Robbie Mertz.

Before that though, Ryan James had also scored his second of the night right after recess.

This season, striker Ropapa Mensah has scored 6 goals and has 2 assists after featuring in 13 matches.