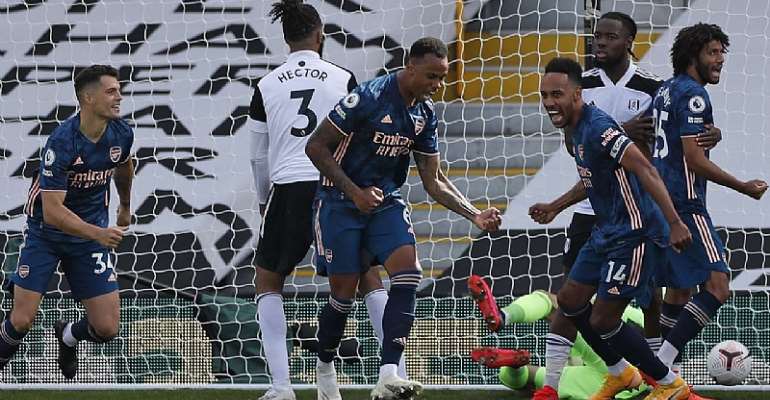 After winning two trophies from the last season, an Arsenal side that looks very improved started off the 2020/2021 English Premier League season with an emphatic 3-0 win against Fulham on Saturday.

The new football season in England has officially commenced this weekend on the back of the successful end to the 2019/2020 edition which had to be stretched as a result of the Coronavirus pandemic.

In a Matchday 1 fixture staged at the Craven Cottage, Fulham welcomed Arsenal in hopes of starting off their return to the Premier League with a good result.

Unfortunately, Mikel Arteta’s men had too much in their locker and cruised to a 3-0 win to complement what has been described as a dominative performance.

An Alexandre Lacazette equalizer in the first half plus equalizers from new signing Gabriel Magalhães and star man Pierre-Emerick Aubameyang in the second half meant that Arsenal picked all 3 points at the end of the 90 minutes.

Collectively, the Londoners earned a rating of 7.2 from Modernghana Sports partners SofaScore.

In detail, the Gunners enjoyed 55% of ball possession with 6 out of 13 shots recorded on target.

Beyond the above numbers, the Arsenal team looked in good shape on the Matchday with the entire team showing the desire to work on and off the ball throughout the 90 minutes.

How the debutants fared:
In the Arsenal starting eleven, manager Mikel Arteta went with a strong side that included summer signings Willian Borges da Saliva, and Gabriel Magalhães.

The two Brazilians ended up performing outstandingly well and deservedly merited high ratings from SofaScore, 8.1 each.

In addition, Willian who bagged a brace of assists was named the ‘Man of the Match’ at the end of the game.