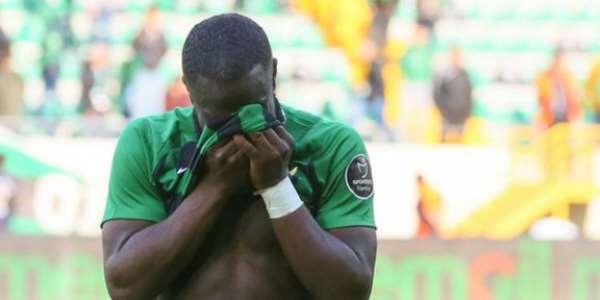 Ghanaian striker Elvis Manu scored his first goal for Ludogorets Razgrad on Saturday evening when the team climbed from behind to record a 3-1 win against Lokomotiv Plovdiv.

The experienced attacker was signed by the Bulgarians giants in August on a free transfer after partying ways with Beijing Renhe to give them a squad boost for the ongoing 2020/2021 football season.

Making his second appearance for Ludogorets in the Bulgarian Parva Liga, Elvis Manu has taken full advantage of what will go down as a good display.

In the second half when his team was trailing to Lokomotiv Plovdiv by a goal to nil, he was introduced to replace Mavis Tchibota on the 56th minute.

He instantly added firepower to the Ludogorets team as they went on to draw level 10 minutes later through an equalizer from Dominik Yankov after he was assisted by Anton Nedyalkov.

Later after piling pressure on Lokomotiv Plovdiv, the home team scored their second of the evening courtesy a strike from Alex Santana on the 79th minute.

Two minutes later, Elvis Manu put the icing on the cake for Ludogorets with his goal to ensured that the team cruised to a 3-1 win against the matchday opponent.

Having scored his first goal for the Bulgarian giants, the 28-year old will hope to build on the form in order to continue hitting the back of the net.