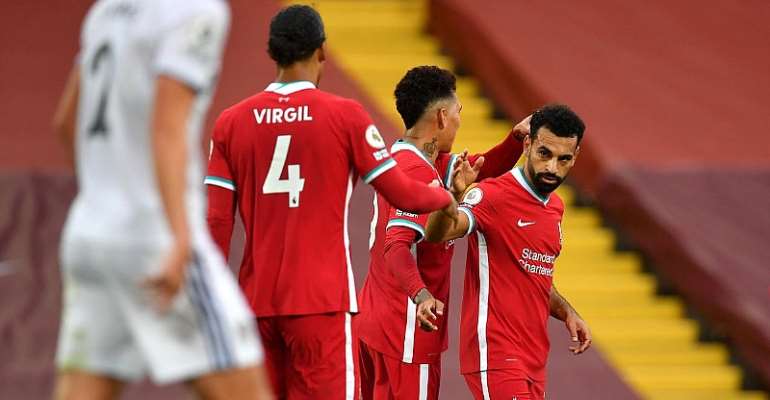 Mohamed Salah scored a hat-trick as Liverpool got their title defence off to a thrilling start with a hugely entertaining 4-3 victory over newly-promoted Leeds United at Anfield.

The Egyptian forward netted for the fourth straight opening day of the season when he converted a harshly-awarded fourth-minute penalty.

Leeds, who were playing their first top-flight match in 16 years, levelled soon after through Jack Harrison’s superb solo goal.

Virgil van Dijk then restored the home side’s advantage with a header from a corner before the Dutch defender went from hero to villain with an error that allowed Patrick Bamford to score at the Kop end.

Salah then thundered his second of the evening into the top corner – and the Reds’ 550th goal under Jurgen Klopp - to cap a sensational opening 33 minutes of football.

Inevitably, the second half couldn’t quite live up to the rollercoaster nature of the first, but it remained end to end and Leeds reached parity one again when Mateusz Klich burst into the box and fired a sweet shot beyond Alisson on 66 minutes.

Liverpool pressed for a winner and got it two minutes from time. Salah claimed the match ball with another clinical penalty as the Merseysiders extended their club-record unbeaten league run at Anfield to 60 matches.

Klopp’s men will now turn their focus on a visit to big-spending Chelsea on Sunday while Leeds have a midweek EFL tie with Hull prior to their first Premier League home game against Fulham on Saturday.